ANDY LEE made a successful return to the boxing ring last Saturday 9 after seeing off the challenge of Anthony Fitzgerald in Belfast. The Castleconnell man (28) was pushed all the way by Fitzgerald in a fight that was closer than originally expected, but Lee did enough to win on a referee’s score of 98-94. It was Lee’s first bout under new trainer Adam Booth and also his first since losing the world title fight to Julio Cesar Chavez Jnr last summer.

Lee admitted after Saturday’s fight that he has room for improvement, saying that it was “not my best” but that he intends to “take something from it”.
Lee is already looking to his next challenge and this week called out Irish middleweight rival Matthew Macklin.
Lee said: “I think he’d be one of the easier fights for me, Macklin. I’m glad he’s mentioned my name because I’m happy to fight him.”
The Limerick man’s comments struck a nerve with Macklin, who has since warned Lee to “put up or shut up” in a public rebuke.
Both men are under contract to US promoter Lou DiBella and Macklin says it is time for Lee’s actions to match his words.
“Lou has a HBO television date for May 11 and I know he wants to match myself and Andy on that show,” revealed Macklin.
“Lou has a TV date for it and I want the fight so the only question is does Andy really want it or does he just want to be seen to want it?”
“I honestly don’t believe he fancies it and never has but he is after digging a hole for himself with his recent comments so it’s time for him to put up or shut up.” 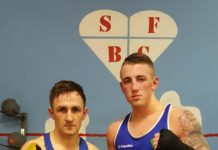