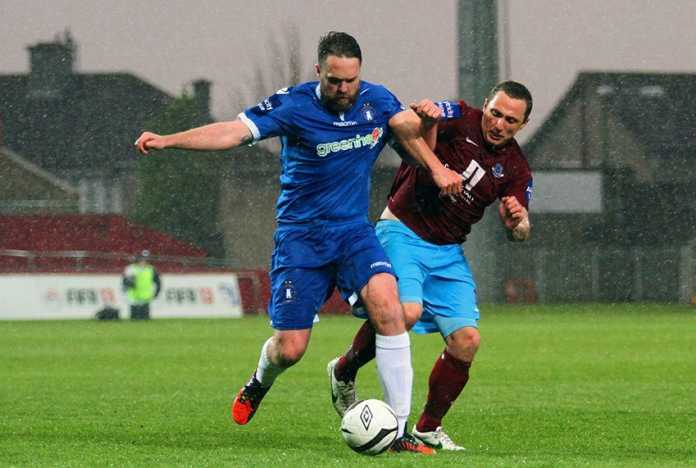 TEN-MAN Limerick FC went down to their second home defeat of the season in atrocious weather conditions in Thomond Park on Tuesday night.

Paul O’Conor’s 30th-minute goal was enough to give Drogheda all three points and the home team’s night got worse later on when Joe Gamble was sent off for a second bookable offence.

Limerick spurned a glorious opportunity to take the lead inside two minutes when Danny Galbraith’s through ball picked out Axel Bossekota, who was left one-on-one with Michael Schlingermann, only to shoot straight at the Drogheda goalkeeper.

Another scoring opportunity came and went in the 16th minute when Craig Curran got his head onto a corner and nodded the ball down to Bossekota, whose shot on the turn drifted wide.

Drogheda’s high defensive line appeared a risky strategy, particularly when another Galbraith through ball left Gamble in on goal, but Schlingermann was out quick to snuff out the threat.

However Limerick fell into the trap of getting caught offside on more than one occasion and, in the other half of the field, they shot themselves in the foot after 30 minutes.

David O’Leary, the hero against Cork City last week, was caught in possession 40 yards from goal and O’Conor bore down on goal. He shot from 25 yards and Limerick keeper Barry Ryan couldn’t keep the effort out.

There was another let-off for Limerick shortly before the interval when Brady crossed into the penalty area and Garry O’Neill miscued his shot from only six yards out.

While it was a rather underwhelming first half performance from Stuart Taylor’s side, the gusts of wind and driving rain were not making life easy for the players and thus we were denied the opportunity to see their passing game at its finest.

Drogheda had another opportunity to extend their lead early in the second half when David Cassidy found space to send a cross into Gavin Brennan, whose header was straight at Ryan.

Limerick huffed and puffed but found chances hard to come by, although they did work a good opportunity to equalise in the 64th minute. Galbraith crossed into Gamble, who turned to lay the ball off to Curran. The Liverpudlian striker couldn’t get a shot in and Drogheda survived that scare.

The home side were dealt a hammer blow in the 76th minute when Gamble, already on a yellow card, committed a late tackle on an opponent. Referee David McKeon played advantage before referring back to the incident and producing his red card.

Limerick had been spurred on by going a man light in previous games but it wasn’t to happen here. Instead it was the visitors who seemed more likely to kill off the game once and for all, with O’Neill having more than one chance to make it 2-0.

It was a quite disappointing night for the Super Blues, who never got into their stride and were unable to build on last Monday’s excellent win away to Cork City. Drogheda, meanwhile, put their Setanta Sports Cup final humiliation behind them in double quick time to move above Limerick in the table.

See all the action from last nights game here