It’s been confirmed today that Bank of Ireland has agreed to become main sponsor of Munster Rugby from July 2013. The sponsorship includes exclusive branding of all playing and training kit for the Munster senior and “A” teams.

The agreement, which is set to run for five seasons, continues a long relationship with the Bank dating back 15 years to 1998, firstly as main sponsor and more recently as official banking partner.

Commenting on the announcement, Garrett Fitzgerald, CEO Munster Rugby said: “Munster Rugby is pleased to have Bank of Ireland become our main sponsor from next season onwards.

“We have had a fantastic relationship with Bank of Ireland extending back to the early professional days of Munster Rugby and seeing it come full circle demonstrates the value we both see in such a partnership.

We look forward to more successful days ahead.”

The announcement of a cash injuection will be music to the ears of Munster coach Rob Penney. The New Zealand native will be looking to recruit this summer to strenghten his squad which will be without the services of Ronan O’Gara and Doug Howlet. However, the IRFU policy on having one Non Irish Qualified (NIQ) player per position, means Munster’s shopping list will be shorter than most.
“You’d like your key recruitments to be in key positions to make the biggest difference but we can’t get a nine, we can’t get a 10, we can’t get a 12, we can’t get a 15. So there’s some frustrations there. The value of players, if you just look at the French market, is just going through the roof, so affordability alongside of the durability and value that they’re going impact on this team is a critical decision.”
Another difficulty for Munster was highlighted Garrett Fitzgerald.
“The reality is, even if Rob had the wishlist of players, there’s a number of issues to get a player to come to Ireland. The taxation rate in this country doesn’t match up with the taxation in France. The climate is an issue. Full stop. There’s no question about that. Already this year, we’ve had offers for two people that were substantial and both of them have gone elsewhere based on taxation rates, really. One of them went to France, on similar money but no comparison in terms of taxation, half what they’d pay here, plus they’d have sun on their backs every morning when they wake up.”
With Ruan Pienaar at nine in Ulster, Jimmy Gopperth at ten, Andrew Goodman at 12 and Zane Kirchner at 15 in Leinster, Munster can only look to recruit a winger from overseas. (Casey Laulala at 13 already).
Andrew Conway is on the way from Leinster as is, so Munster will need to find someone who can play wing, but also maybe two more positions. 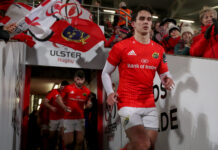 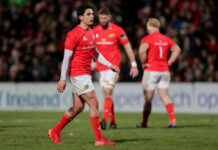