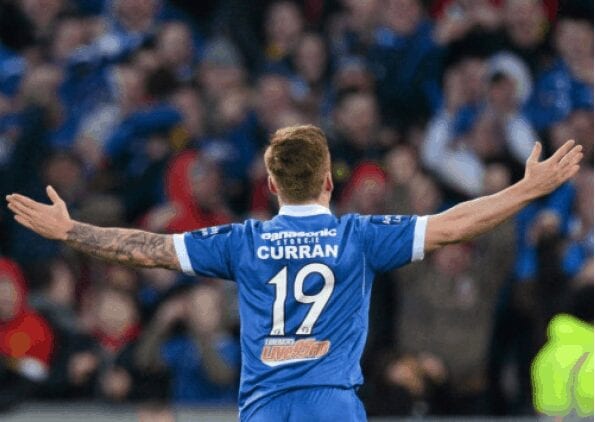 IN the week that he signed a new deal with Limerick FC, striker Craig Curran further endeared himself to the Super Blues faithful after scoring the winning goal against Dundalk in a thrilling encounter at Thomond Park on Saturday evening.

The Liverpudlian’s 82nd-minute strike completed an unlikely turnaround after the visitors raced into a 2-0 lead before half-time, but in a reversal of the roles from the teams’ Oriel Park meeting 12 weeks earlier, it was Limerick who recovered from two goals down.

From the outset it was a very open game of football and the first goal took just seven minutes to arrive. Dundalk midfielder Chris Shields was afforded far too much room to pick out Kurtis Byrne in the Limerick penalty area and Byrne fired an astute volley into the net to give the Lilywhites’ vibrant travelling support reason to be cheerful.

Stuart Taylor’s side almost conjured an instant response, only for Darragh Rainsford’s effort to rebound off the crossbar, and the home team enjoyed no little possession, although that shot from the teenager was the closest they would come to scoring in the opening minutes.

With Limerick unable to force a breakthrough, Dundalk slowly gathered momentum and shots from Dane Massey and Shields indicated that they could easily pick off a second goal. At the other end, the returning Curran was industrious as ever, providing a few crosses into good areas, but none of them resulted in anything resembling a goal threat.

A 30th-minute Shane Tracy free kick from distance had Dundalk goalkeeper Peter Cherrie on the alert, although it fizzed wide. Seven minutes later, the visitors won a free of their own just outside the Limerick penalty area. Massey struck it and, via a deflection, it nestled in the bottom corner of Barry Ryan’s net.

Two goals down at half-time and without a league win in five games, the picture looked bleak for Limerick at the interval, and it nearly got calamitously worse just after the restart.

Shaun Kelly attempted to clear his lines but instead managed to send the ball behind him and it was on its way into the net before Ryan got back to claw it away for a corner. Had he not done so, the concession of such a freak goal to make it 3-0 would have surely killed the match.

The game’s third goal came in the 54th minute. Limerick won a free in a very good position and dead ball specialist Tracy curled it into the Dundalk net to halve the deficit and bring Thomond Park to life.

As with Dundalk’s first goal, though, there was nearly a quick-fire response at the other end, Byrne teeing up John Mountney for a strike which ultimately flew over. Then, in a frantic three-minute period, Tracy provided a brilliant cross for Axel Bossekota, but the Belgian striker couldn’t direct it on target.

On 67 minutes Curran also had a headed chance which went begging, but Limerick were getting closer. In the 74th minute Taylor introduced Rory Gaffney and within seconds the striker made a telling impact, finishing from close range after Tracy’s free kick saw the ball deflected into his path.

Bossekota then tried an audacious overhead kick and the ball fell for Tracy, whose shot was headed off the line by Andy Boyle and out for a corner. From the resulting set piece, the ball was cleared only as far as Dave O’Leary. His shot was blocked and then Curran latched onto the loose ball, hammering it home to complete the turnaround and send the Limerick fans wild with delight.

Taylor’s side managed to see out the remaining few minutes to record perhaps their finest win of the season thus far, one which lifted them back into the top half of the Premier Division.

It was just a pity that only 1,249 people paid in to witness one of the best games of the season, although such was the fare on offer that surely many of those will be back for more. This was a morale-boosting night for Limerick FC and a tremendous advert for League of Ireland football.