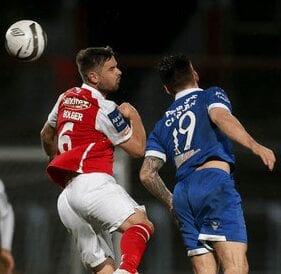 LIMERICK FC held Premier Division leaders St Patrick’s Athletic to a scoreless draw at Thomond Park on Saturday night, ending a run of four consecutive defeats in all competitions in a pulsating match which belied the final score.

The Super Blues defied their poor recent form to dominate proceedings against the Inchicore visitors and created several scoring opportunities in the first half, but they had to be resolute at the back after the interval to resist the Saints’ tide.

Stuart Taylor’s men showed from the off that they held no fear against St Pat’s and it was the typical work-rate of Craig Curran which forced visiting goalkeeper Brendan Clarke into a rushed 11th-minute clearance after Daryl Kavanagh’s backpass.

After a feisty opening half hour with few chances of note, Limerick then had a five-minute spell where they were unfortunate not to take what would have been a deserved lead.

Firstly, Rory Gaffney picked out Curran in the middle and the Liverpudlian striker was set to pull the trigger when Ger O’Brien got back to make an outstanding interception and snuff out the chance.

A minute later, Dave O’Leary floated in a free kick and Clarke dashed out of his goal, missing the ball in the process. It fell to Samuel Oji, whose shot belted off the side netting.

Winger Danny Galbraith looked lively in the first half and he delivered an incisive cross to Curran, whose diving header forced Clarke to react sharply. St Pat’s worked the ball to the impressive Kavanagh on the left as half-time drew near, but Barry Ryan had little to do in a first half that offered much encouragement to a Limerick team badly in need of a confidence boost.

Liam Buckley’s team emerged much sharper after the break and should have taken the lead on 47 minutes. Byrne played in Kavanagh, who looked certain to score but fired over with no defender near him.

Shortly after that let-off, a Killian Brennan free kick from the right forced Limerick to hastily clear their lines and then Christy Fagan glanced a header wide from Byrne’s cross.

After a spell of hectic defending, Limerick then fashioned a glorious chance on the hour mark when Robbie Williams’ ball into the box was flicked on by Gaffney to O’Leary, who failed to find the target from a good position.

At the other end, Ryan performed heroics to deny Kenny Browne and Fagan in quick succession as the visitors piled on the pressure. In the 72nd minute Byrne fired over with an angled shot from inside the penalty area.

Oji was having an impressive game at centre-back and he got an important block on Byrne’s cross, although the defender nearly turned the ball into his own net in the process.

St Pat’s laid siege to the home side’s goal with increased desperation as the minutes ticked away, with Limerick now holding on stubbornly for a draw. The visitors looked primed to land a stoppage time winner and go five points clear at the top when Brennan lofted the ball into Byrne, but his shot struck the post and the league leaders had to be content with a point.

Limerick would certainly be content with a point considering the pressure they were under in the second half and the work that Taylor’s side put in meant that the draw was fully merited and, importantly, stops the rot after a prolonged losing streak.