The Munster squad to face Glasgow Warriors in the top of the table round six clash on Friday night in Scotstoun Stadium (7.35pm) has been named.

Andrew Conway, Ivan Dineen and Ronan O’Mahony return to senior action after impressing for the Munster A side in the last two weeks while JJ Hanrahan starts alongside Conor Murray at half back.

Rob Penney starts with a new front row for Friday’s encounter with James Cronin making his third league start as he lines up next to Ireland squad members Mike Sherry and Stephen Archer. Fan favorite CJ Stander joins Sean Dougall and Peter O’Mahony in the back-row.

Head Coach Rob Penney, talking about the changes to this week’s side, commented “Due to the short turn-around and the travel and intensity of the last three weeks, and the importance of the next two weeks, there is a bit of freshening up in the group and this is why we’ve made a few changes.

Glasgow are top of the table, semi-finalists who probably should have been in the final last year and they are the form team in the Rabo in at least the last nine months.  It doesn’t get more difficult than playing them at their home ground and it’s as big as it gets in the Rabo at this time of the year.” 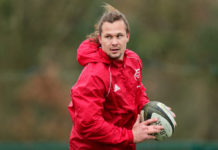