NEPTUNE Stadium in Cork hosted a huge crowd on Saturday night when the Women’s National Cup Semi Finals took centre stage.
In the first semi-final, defending champions UL Huskies reversed the result from their most recent league meeting with Killester to beat the Dublin ladies 80 to 59.
The Dublin side will be frustrated with the game as their star player Candace Bond sat out large stretches due to foul trouble, leaving them incapable of marshalling UL’s Rachael Vanderwal who rained in 26 points.
UL will be joined by Team Montenotte Hotel Cork in the final. The Cork side outlasted their old rivals DCU Mercy in an exciting and bruising encounter that finished 62 to 53.
Led by an inspired Emilee Harmon who contributed 25 points and 13 reb,ounds, Montenotte were deserving winners and now set up a rematch of the 2013 final, which they lost by 10 points.
The weekend featured plenty of top quality basketball outside of the Basketball Ireland Premier League teams as Neptune Stadium and Parochial Hall hosted U18, U20, Senior Women’s National Cup and Men’s National Plate semi-finals.
The Men’s and Women’s National Cup Finals will once again be televised live on Setanta Sports. The live coverage of the 2014 finals will commence at 6.30pm on Friday January 24th with the Women’s final between UL Huskies and Team Montenotte Hotel tipping off at 6.45 before the Men’s final involving C&S UCC Demons and Dublin Inter begins at 8.45. 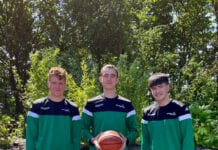