LIMERICK city councillor Tom Shortt was elected last weekend by members of the Labour Party from across Munster and South Leinster to third position on a substitute panel of four to fill the Ireland South Labour European seat.

In a keenly fought contest between six candidates, Cllr Shortt was elected to third position behind two Cork candidates who had reached the quota after attracting 60 per cent of the transfers on the second count.

Sign up for the weekly Limerick Post newsletter
“This is exactly the position from which Phil Prendergast came to fill the seat after Alan Kelly the sitting MEP was elected to the Dail in 2011,” Cllr Shortt said after the selection convention which was attended last Sunday by Labour leader Eamon Gilmore.

“The Cork candidates had an advantage but I was delighted with the very healthy level of transfers I got from across the constituency and I am very satisfied with that performance, it has raised my profile considerably in the party outside Limerick,” he said.

He went on to thank the Abbey Branch in Limerick and the Cahir Branch in South Tipperary for supporting his nomination. 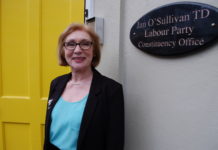