LIMERICK FC recorded their second consecutive victory in the SSE Airtricity League Premier Division on Friday night at Thomond Park as a fantastic strike from substitute Tam McManus secured a 2-1 win over bottom club Athlone Town.
Robbie Williams had put the home side in front on 20 minutes but slack Limerick defending allowed Kealan Dillon to plunder an equaliser for the visitors shortly before half-time. McManus then struck early in the second half with an early goal of the season contender.
Buoyed by their first league win at Bohemians last week, Limerick made a lively start to proceedings, with Shane Tracy’s set piece deliveries giving the Athlone defence plenty to think about. One such play resulted in Rory Gaffney drawing a firm save from Paul Skinner after nine minutes.
The away side were quick on the counterattack, though, and Sean Byrne’s low shot forced a reaction save from Barry Ryan. On 15 minutes Skinner was called into action again, stopping Jason Hughes’ effort, although the Limerick midfielder’s shot was straight at the goalkeeper.
Williams briefly went off the pitch for treatment but within minutes he had made a vital contribution. Limerick won a free kick on the right and Tracy whipped it into the penalty area, Williams glancing a header into the bottom corner of the Athlone net for the Super Blues’ first home goal of 2014.
In the 29th minute it was nearly 2-0, and the English left-back was close to scoring a second goal. He let fly from 30 yards and his shot fizzed just wide of the upright.
Athlone had chances too, James O’Brien’s header requiring a save from Ryan, and Limerick were dealt a blow on 39 minutes when Craig Curran hobbled off injured, with McManus entering the fray.
The visitors drew level out of nowhere after 41 minutes, the Limerick defence caught napping as Dillon dinked the ball past Ryan for the equaliser.
Athlone were quicker out of the blocks at the start of the second half but it was the home side who struck in the 51st minute. McManus escaped his marker, let the ball run across him and hit a left-foot curler that wouldn’t look out of place in one of the world’s top leagues.
After that moment of magic, the game went into a lull, with Williams again trying his luck from distance, but this time the shot was well off target. Stuart Taylor sprung Ross Mann from the bench midway through the second half and, in his first Premier Division appearance, the youngster’s pace and power caused trouble for Athlone.
On 76 minutes he broke through the Athlone defence to go one-on-one with Skinner. The keeper tripped Mann in the penalty area and was sent off by referee Anthony Buttimer. After a delay which ended, strangely, with outfield player Sean Brennan going in goal, despite a goalkeeper being named on the bench, Tracy’s spot kick was saved and Gaffney blasted the rebound over.
Despite having an advantage on the pitch and on the scoreboard, Limerick were far from comfortable in the closing stages, inviting pressure from an Athlone side chasing a first point of the season.
A free kick from midfield was lumped forward and the ball fell for Philly Gorman, who almost managed to turn it into the Limerick net, and the Super Blues had to withstand five minutes of injury time before securing three more points.
Their first home win of the season, and second league win in a row, elevated Limerick to 8th in the table, while Athlone are still without a point from eight games and in danger of being cut adrift at the foot of the league.
Limerick FC: Ryan, Kelly, Folan, Oji, Williams, Agyemang (Mann 66), Duggan, Hughes, Gaffney, Curran (McManus 39), Tracy
Athlone Town: Skinner, McMahon, A Byrne, Prendergast, Clancy (S Brennan 78), Dillon (Marks 87), S Byrne, Hughes, Rusk (Sweeney 90+4), O’Brien, Gorman
Referee: Anthony Buttimer
Attendance: 1,141 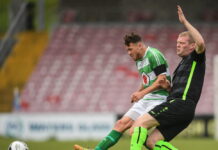 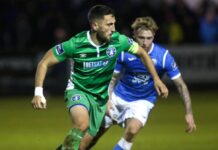 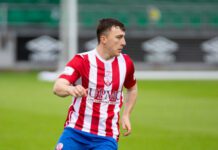