FEARS are escalating that water schemes across the city may be contaminated following the discovery of lead in the water supply at three housing estates on Limerick’s northside over recent weeks.

Sinn Féin representative for City East, Séighin Ó Ceallaigh, has expressed concerns about the quality of water in his ward.

Comhairleoir Ó Ceallaigh is in no doubt the current water crisis in Ballynanty, Kileely and St Mary’s Park could spread across the city.

And he suspects that older estates in his constituency such as Garryowen, Janesboro, Kennedy Park, Southill and the Ballysimon Road might also be hit.

“Over the past couple of weeks the people north of the Shannon have been in crisis due to contamination of their water supply. This has lead me to fear for the safety of my own constituents, and I have been in contact with the Council regarding precautions being taken, which I am hoping will be put in place as soon as possible,” said Cmhlr Ó Ceallaigh.

“Having studied the trends in the situation on the northside, it is quite clear that it is the older estates which are most at risk, a theory which the Council has confirmed. I would urge the people of estates such as Garryowen, Janesboro, Kennedy Park, Southill and the Ballysimon Road area of my constituency to be prepared for a situation like the one in Ballynanty, as these are much older estates where contaminated water is a possibility,” he warned.

He is now calling on Irish Water to take control of the city’s water supply and insists that they should provide clean water to all that need it, and work as fast as possible to solve the issues with lead piping.

“If they are going to charge people for water, which I disagree with, then they should at least make sure that the service they are charging for is not causing damage to people’s health. There are many children and babies in these areas, and testing needs to move at a much faster pace, in order to ensure the safety of residents,” he concluded.

There was no comment from Irish Water at the time of going to press. 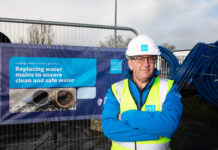