From the opening round through to the final Paradise Silva trained by Tipperary based Pat Buckley, seemed right at home around Limerick Greyhound Stadium.  After performing heroics to even qualify for the final after serious traffic in the semis, there was a certain inevitability that he would claim the big prize his talent so richly deserved.

In truth, the race was over from the early yards. Local runner Ballyana Foxtrot was fastest into stride from trap six and led briefly, but Paradise Silva also came away well and struck the front before the turn. Once doing so the result was never in doubt despite the best efforts of Ballyana Foxtrot.

The main market rival to Paradise Silva and Ballyanna Foxtrot was Vulturi based with Kerry based trainer Liam Dowling, but he lost his place around the opening two bends and could never land a telling blow. Instead Paradise Silva raced clear throughout for a famous victory. Maintaining his powerful gallop all the way to the line he emerged a brilliant two and a half length winner over Ballyana Foxtrot in a wonderful 29.50. Vulturi finished fast to take third a further three and a half length adrift. It was then a short head to Burgess Oscar which was in third place for 549 yards until caught in the fnal stride by Vulturi. He was followed home by Castleivy Crash and Borna Central.

It was a fitting end to what had been a great classic at the Limerick Stadium and a huge crowd turned up to savour the final and also to cheer home the two local runners Ballyana Foxtrot and Castleivy Crash. The latter didn’t make one of his flying starts and was struggling throughout, but Ballyana Foxtrot produced a great run and gave the members of the Limerick Quartet Syndicate and trainer James Roche a great run for their money.

Trainer Buckley was absolutely delighted with winning his second Leger and he added. “He will now go to the Night of Stars in Shelbourne Park Greyhound Stadium on Saturday 29th November.” 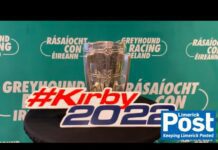 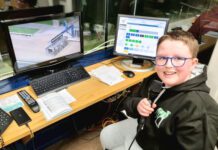 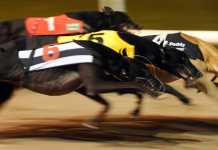 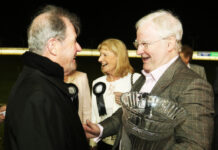 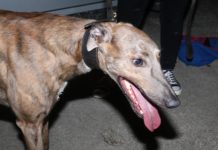