MUNSTER face the Ospreys this Saturday in the Guinness Pro 12, knowing that a win is a must to maintain top spot in the league.
Anthony Foley’s men have won their three games taking place during the Six Nations and a win this weekend would go along way to securing a home semi final with just six rounds remaining.
Munster’s 22-10 victory over Glasgow took them to the top of the PRO12 table for the first time since round 9.
The Ospreys were victorious 19-14 in Limerick in round 4 and are going for their first season’s double over the Munstermen since season 2011/12. Munster’s record at Liberty Stadium in all competitions is won three, lost eight.
Speaking ahead of this weekend’s clash, Munster head coach Foley stressed the need for a win, while reminding Munster fans of the dangers the Ospreys possess.
“They have a very strong pack, they are very abrasive and they have a lot very experienced players that can do a job. They have Bearman, they have got Tipuric and James back and Jarvis back from Wales. I think Duncan Jones is still there – these guys know how to get around a game. So it will be tight up front, their half-backs were on fire when they played us in Thomond Park both Biggar and Webb but fortunately they will be elsewhere hopefully.”
Kick off on Saturday is at 2.40pm in the Liberty Stadium with the game being televised live on Sky Sports.
On the local scene, Young Munsters will travel to UCD this Saturday in Division 1A of the Ulster Bank League. John Staunton’s men are not out of relegation trouble just yet, but in saying that, they are just five points off the top four.  A win in Belfield would be a huge lift.
In Division 1B, UL Bohemians will be looking to win their first Limerick derby of the season as they face Shannon on Friday night at Thomond Park. A win for Shannon and they are all but safe, a loss for UL Bohemians and it might just come down to the last day. Kick off is at 7.30pm. Title chasing Garryowen travel to Ballymena too this Saturday. The ‘light blues’ are on a great run of form and this weekend should see them collect at least 4 points in their quest for promotion back to the top table at the first attempt.
In Division 2A, Thomond, in search of a top six spot to be in the third tier again next season entertain Rainey OB, while in Division 2A, all three Limerick sides are at home, with Bruff hosting Kanturk, Old Crescent facing Greystones and Richmond entertaining unbeaten and table topping Highfield. All Saturday games kick off at 2.30pm, yes, the same time as Munster are playing. Take from that what you will, as a fan of the Ulster Bank League clubs. 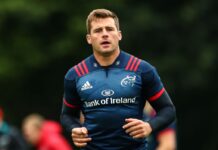 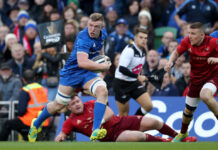 Tom Savage: Leinster will be a big challenge but this Munster team can beat them 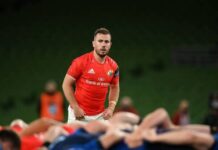 Jack Crowley And The Future Of The Munster Ten Shirt