LIMERICK FC got their 2015 SSE Airtricity League campaign off to a disastrous start with a 3-0 hammering against Bohemians at Jackman Park on Saturday night.

The visitors were two goals up inside 15 minutes and added a third shortly after half-time on a night when they dominated from start to finish.

It took Adam Evans just 40 seconds to open the scoring, converting from close range after Conor O’Donnell had initially made the save from a Bohemians corner which Limerick failed to clear.

Keith Long’s side doubled their lead after a quarter of an hour with a goal that will give Limerick boss Martin Russell the odd sleepless night. Evans latched on to a loose ball that struck Robbie Williams and rebounded kindly for Dean Kelly to provide a simple tap-in which, even at that stage, killed the game as a contest.

A lethargic Limerick were restricted to half-chances, with Darragh Rainsford ballooning a shot far too high in the 20th minute and the young striker’s through ball to Dean Clarke a few minutes later not finding its intended target.

If one moment summed up the night for the home side, it was in the 28th minute when Williams, attempting to clear his lines, stumbled in doing so and sliced the ball out for a Bohemians throw-in.

Limerick created a good opening on 31 minutes when Sean Harding’s cross was just too powerful for the onrushing Ian Turner to get his head to, while Bohs had a half-hearted penalty appeal turned down after Lorcan Fitzgerald went down under a challenge in the Limerick box.

Russell introduced Vinny Faherty off the bench for his Super Blues debut as half-time, replacing Ross Mann, but instead of this proving to be a game-changing move, the task became even more mountainous for the home side shortly after the interval.

On 56 minutes, Fitzgerald curled home a free kick from 20 yards to make it 3-0 to Bohemians, who despite being much the better side continued to show the desire of a team chasing the game.

There was a rare moment of excitement for Limerick fans shortly after the hour mark when Bohs goalkeeper Dean Delany raced from his goal to clear, only to give the ball straight to Faherty, who tried to chip it in from 40 yards before Derek Prendergast headed it to safety.

Limerick had thrown in the towel as the second half rolled on, with passes going astray and Bohemians winning all of the physical duels.

It was almost 4-0 late in the game when more slack defending from the hosts gave Patrick Kavanagh a chance to shoot, his effort striking the post before going wide.

Limerick’s one and only shot on target came in the 86th minute when Delany tipped away a Shane Duggan snap-shot, the Bohs keeper remaining alert despite a trouble-free night.

The majority of the 920 supporters in Jackman Park undoubtedly went home hugely disappointed with this very worrying display from Limerick, who lie bottom after the first weekend of matches.

While Russell won’t be reaching for the panic button just yet, he knows that more performances like this will lead to a difficult year for beleaguered Limerick FC. 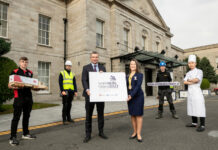