Shannon Airport is the destination for aviation enthusiasts from across the country as the world’s largest aircraft, the Antonov 225, proves a star attraction again following its overnight arrival.

The giant aircraft, which was built to carry the then Soviet Union’s space shuttle between launch and landing sites, landed for a transit stop at 2:45a.m. today from Bangor International Airport and, true to form, is attracting droves of onlookers to Shannon today as it dwarfs anything else on the airfield. The aircraft is due to depart this evening at 10p.m. for Châteauroux Airport, France.

With a wing span wider than the Croke Park pitch and, from nose to tail, over one and a half times the length of an Olympic swimming pool, the Antonov 225 stands alone as the largest and most powerful jet ever made.

Due to the length of its runway – the longest in Ireland – Shannon is the Irish only that the Antonov 225 has landed at.

This is the first visit to Shannon of the graceful giant since May 2013 and the appetite to catch a glimpse of the Ukrainian aircraft remains unchanged. Niall Maloney, Shannon Airport Operations Director, said the aircraft never fails to astound.

“It’s an incredible aircraft and when you see it on the taxiway here and can put its size into perspective, it’s almost unbelievable that it can get up into the skies, let alone be as graceful when it’s up there,” he said.

“Last time it was here, in 2013, it landed during daylight hours and there were hundreds if not a couple of thousand people who came to see it. People stood on the roofs of vans just to be able to video it landing.

“This time around it arrived in the middle of the night and we still had up to 20 cars loads of people in the viewing area ahead of arrival. There was only one Antonov 225 made and this is it so when it comes here people are very keen to see it.”

“We love having it here. The excitement around its presence is great and creates a great buzz. We have people coming and going all day to see it.” 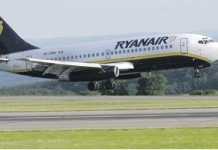 Ryanair: “We do not expect to operate flights during the months of April and May”