Seamus Cregan from Croom, Co. Limerick, who works as a Stud Hand for Islanmore Stud, has won the Dedication To Racing Award at the Irish Stud and Stable Staff Awards sponsored by Godolphin.

Seamus who has worked at Islanmore Stud in Croom for 50 years, oversaw the foaling and nurturing of one of the stud’s most famous daughters Snow Fairy who went on to win six Group 1s and become a world champion. He was presented with a trophy and a cheque for €2,500.

The 11th running of the awards and the first sponsored by Godolphin was held at the Keadeen Hotel in Newbridge on Tuesday, April 14th. The trophies were presented by 19-time UK Champion National Hunt Jockey AP McCoy. Simon Coveney TD, Minister for Agriculture, Food and the Marine was guest of honour for the event and Jonathan Mullin, Irish Editor of the Racing Post, was MC for the occasion.

Bernard Caldwell, of the Irish Stable Staff Association: “I’d like to congratulate all the award winners and acknowledge the extremely high standard of nominations we received for the first year of Godolphin’s generous sponsorship of the Irish Stud and Stable Staff Awards. I’d like to thank all of our partners and everyone who helped make the evening such a success.”

The full list of winners and runners-up is as follows:

The winners of the Leadership, Rider/Groom, Head Lad/Girl, Stud Employee and Administration awards received a trophy and €5,000 with an additional €4,000 for employees from the winner’s yard, stud or company .The two runners-up in these categories each received €500. Winner of the Irish Racing Excellence Award, Pat O’Donovan received a second trophy and a further €5,000, with an additional €5,000 for employees from Jim Bolger’s yard, where he is Assistant Trainer.

The prize for the winners of Dedication to Racing, Lifelong Learning, Ancillary Services and Racecourse Grooms Canteen was a trophy and €2,500.

The trophies, by sculptor Ani Mollereau, are a contemporary design of a thoroughbred horse representing the spirit of the horse racing industry.
In association with The Racing Post and managed by the Irish Stable Staff Association (ISSA) and Horse Racing Ireland, the Irish Stud and Stable Staff Awards, sponsored by Godolphin had a total prize-fund of €70,000. 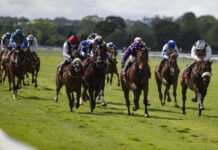 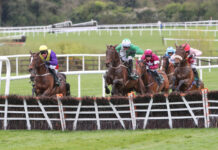 Point-to-point to make staggered reintroduction across the country