The young Leinster man scored three tries in two games for his club in March as they cemented their place as league leaders and earned a home play-off taking place this Saturday against Young Munster. Tom has previously player for Ireland U20s and this season for Leinster A. 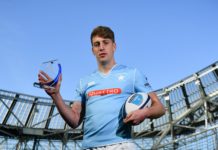 Cronin on the double at Ulster Bank League Awards