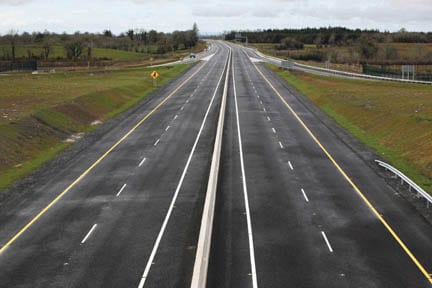 THE long-awaited €1 billion Limerick to Cork motorway project has once again been postponed after Transport Minister Paschal Donohoe refused to allow it to go to the planning stage due to lack of funding.

According to the National Roads Authority, the motorway could cut the journey time between the two cities by up to 30 minutes, as well as bypassing a number of accident blackspots.

Limerick Fianna Fail TD Niall Collins has criticised the decision, warning that it will “further enhance the recovery divide between Dublin and the regions, damage connectivity and competitiveness”.

“It beggars belief that the Government are continuing to peruse a brand new motorway from Limerick to Foynes, which is very controversial within our communities while abandoning plans to link the second and third largest cities in the country”, he said.

“This is a very strategic piece of infrastructure for the West and South West to link two of the largest cities in Ireland outside Dublin. I know how treacherous that road is. It’s dreadful that the two biggest regional cities are not connected by motorway.”

Cllr O’Brien added that while Shannon Airport continues to grow, Cork Airport is being “effectively downgraded” and a motorway between the two cities is vital to transport passengers.

A spokesperson for the Department of Transport told the Limerick Post: “The Minister has stated the position that given the national financial position, there have been very large reductions in roads expenditure over the past number of years. The reality is that the available funds do not match the amount of work which could be undertaken.

“For this reason it has not been possible to progress a range of worthwhile projects and the main focus has to be on the maintenance and repair of roads and this will remain the position in the coming years. The scope for progressing new major road improvement projects will be very much dependent on the availability of funding in the future as the economy recovers further.”

The spokesperson added that the Minister “does not currently plan to review this decision”.

The N20 Limerick to Cork road is known as one of the most dangerous primary roads in the country that has been the scene of numerous fatal accidents.

The NRA has identified the proposed motorway as a priority project; it was previously shelved in 2011 and the NRA has said that it will take up to ten years to complete if approval is granted.