LIMERICK FC’s chances of survival in the SSE Airtricity League Premier Division now look remote after Saturday’s 0-1 defeat at home to Bray Wanderers at Markets Field.
Despite the visitors not having a manager for the game following Trevor Croly’s departure and the players organising the team themselves, the Seagulls left with all three points courtesy of David Scully’s 90th-minute free kick.
Limerick also lost Sean Harding to a second yellow card after an hour and the gap between them and 11th-placed Sligo Rovers stands at eight points, with the Super Blues stuck on five points since the May bank holiday weekend.
Manager Martin Russell was again left to try and pick the positives from the team’s seventh straight league defeat. He said: “We were well in the game and we had a massive chance to go in the lead but 30 seconds later we’re down to 10 men. That’s a reflection of how tight the game was. As has been the case during the season, those tight margins have gone against us.”
Limerick’s attention now turns to another home fixture this Saturday evening when Galway United travel to Markets Field (kick off 6:30pm).
Russell remains defiant despite his team’s increasingly precarious position, saying: “We’ve always been competitive. I believe that in the games we’ve played, we’ve deserved at least five or six more points. That’s why I think we can get those points.
“It’s not as if the teams above us are notching up wins and we’ve got Sligo next at home after Galway. If we can get a couple of wins, we’re still in there with a chance.”
Russell also stated his intentions to add to Limerick’s squad during July, with Bermudan goalkeeper Freddy Hall reportedly on trial with the Super Blues this week. 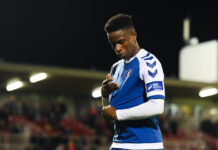 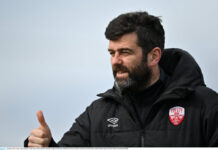 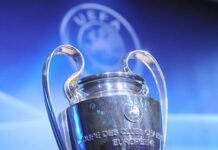