RYANAIR is making no comment on whether or not it plans to cut routes and frequency at Shannon Airport next summer.

Aviation sources claimed this week that the budget airline will be dropping its routes to Poitiers and Nice and cutting frequency on routes to Memmingen (Munich), Manchester and Paris for Summer 2016.

But the airline would neither confirm or deny the claims in industry magazine, ‘Travel Extra’ saying only that they “are currently finalising our summer 2016 schedules.”

But even if the Ryanair changes go ahead, Shannon’s fortunes are still climbing

The airport will see extra capacity with Aer Lingus, who have based the larger A320 rather than a A319 there since last week.

Aer Lingus introduced a larger aircraft on its service to Heathrow, providing an additional 35,000 seats, and have confirmed increased capacity on its services to Faro and Malaga, yielding a further 20,000 seats.

And there was good news from US with Delta Airlines confirming it will use a larger aircraft on its seasonal service to New York. From next May, a Boeing 767-300 aircraft will be used on its Shannon to New York/JFK route resulting in a 25 per cent increase in capacity, or 17,000 additional seats.

A spokesman for Shannon Airport said: “Ryanair operate to 17 destinations from Shannon, carrying over 800,000 passengers annually. We will continue to work with our airline partners, including Ryanair, to explore new opportunities.”

“Over the past two years, the airport has experienced a 21 per cent growth in traffic and is now focused on consolidating the tremendous increase in capacity which we have enjoyed. We are heartened by the recent Aer Lingus and Delta announcements which between them will see an additional 123,000 seats coming to Shannon.” 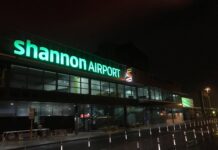 “The ball is in your court, Minister” Quinlivan calls for return of Shannon Airport to DAA umbrella

“Shannon Airport is a vital component of our tourism infrastructure”