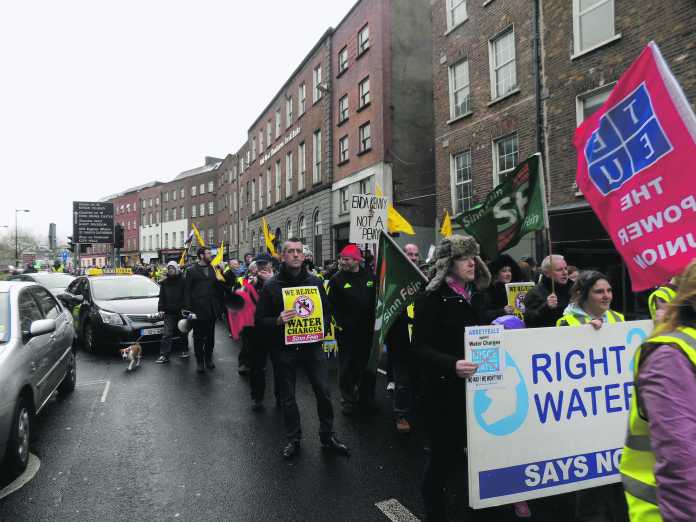 “WATER charges discriminate against working people and the unemployed in favour of the wealthy and are another regressive tax that takes money out of the economy.”

This was the message from Limerick city councillor Cllr Maurice Quinlivan to a crowd of more than 300 anti-water charges supporters at last Saturday’s Right2Water demonstration outside City Hall.

The Sinn Féin General Election candidate went on to predict that Fine Gael and the Labour Party’s refusal to listen to the anger of the people will come back to haunt them at the ballot box.

“Public support for the Right2Water movement demonstrates quite forcefully that the issues of water charges and Irish Water are firmly on the agenda for the general election. No matter what the government tries to spin, their TDs and candidates will rightfully suffer for the imposition of these unfair charges and the debacle that is Irish Water,” Quinlivan declared.

“Water charges discriminate against working people and the unemployed in favour of the wealthy and are another regressive tax that takes money out of the economy. Our public water system is already paid for through general taxation which is progressive and we wish it to remain that way.”

Anti Austerity Alliance General Election candidate Cllr Cian Prendiville also took aim at Fine Gael and Labour in his speech. He said that the government has wasted millions of taxpayers’ money trying to coax and bully people into paying.

“Despite all this intimidation, the government have failed to get enough people to pay to make this charge viable. In fact, last year they spent more sending bills, text, calls and in other gimmicks and grants trying to get people to pay than they actually raised.

This new tax is costing the government more to collect than it is raising. Irish Water is fatally wounded by this level of non-compliance, and it is completely unviable,” Cllr Prendiville suggested.

He also told anti-water charges supporters that they were at the starting point of a political revolution “against the corrupt political cartel of Labour, Fianna Fail and Fine Gael that has ruled this state for decades”.

“I think we should send a message to Michael Noonan, Willie O’Dea, Jan O’Sullivan and Kieran O’Donnell: We are coming for you. We are coming, and we won’t stop till we have equal, principles Left government, and a society built in the interests of the millions, not the millionaires.”