A Limerick man has been brought before the Special Criminal Court  tonight (Wednesday) for possession of more than 700 rounds of ammunition.

He is also charged with the possession of three rounds of 9mm calibre ammunition at his home address on February 22.

Det Garda Michael Herlihy said that when he arrested Mr Costello, he made no reply to the charges. He then brought him to Newcastlewest Garda station from where he was taken to the Special Criminal Court.

The matter was listed for mention and a possible bail order application on March 1.

Abbeyfeale company getting back to work 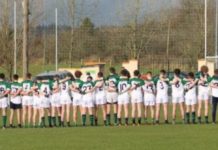