A SENIOR Green Party activist has raised concerns over a planning application from Irish Cement to replace fossil fuels at its Mungret works with alternative fuels from materials such as rubber from used tyres as part of a €10 million development plan.

The project, which will create 40 new jobs, will see Irish Cement replace fossil fuel with alternative fuels to improve the sustainability of the Limerick operations, where 80 people are currently employed.

However, according to James Gaffney, who was the Green Party General Election candidate in the Limerick City constituency, the project is not just a simple case of changing fuel.

“The burning of tyres can result in the emission of a number of dangerous chemicals such as dioxins and furans,” he claimed.

“As far as I’m aware, there is no public consultation planned to discuss the process with local residents. It would appear that no lessons have been learned from the rushing through of the gasification plant in Gortadroma,” he added.

Mr Gaffney is now calling for a full public consultation on this issue and urging all residents to make their concerns known their local representatives, including their recently elected TDs.

“I am not happy to see this potentially dangerous process rushed in to Limerick and I hope that politicians across all parties can unite to protect the public health in the city,” he said.

An Irish Cement spokesperson said that the replacement of fossil fuels with suitable alternative fuels and alternative raw materials is not only good for the environment but also good for our business.

“In early December 2015, Irish Cement announced its intention to seek permission to begin replacing imported fossil fuels with tyres and other specified alternative fuels at its Limerick cement factory. This process involves a new planning application and a review of the EPA licence.

“The company invited the seven local electoral area councillors in the Mungret area to visit the plant and to hear about the new proposals. Over 500 information booklets on this project were circulated to local neighbours, the booklet is also available on the company website.

“The company also invited local residents and community groups to attend a series of public information evenings held at the South Court Hotel in early December. On-going engagement is continuing with community groups and members of the public.”

The Planning Application was lodged on February 29. 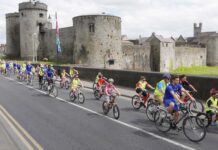 Family event to round off Bike Week in Limerick