LIMERICK’S status as a world class sporting destination will be raised internationally in July, as future Olympians descend on the city, for the UIPM World Youth A Tetrathlon Championships.

The hosting of the event in Limerick, which was launched today (Thursday) at King John’s Castle by Mayor of Limerick City and County, Cllr Liam Galvin, will bring the world’s best youth athletes up to the age of 19 in the tetrathlon sport to the University of Limerick campus between July 14th and 18th to compete in four disciplines – Swimming, Fencing, Running and Shooting.

The games, which will attract up to 300 competitors, are being brought to Limerick by Pentathlon Ireland, the national governing body for tetrathlon events, in conjunction with Limerick 2020.
Today’s event also included the launch of the event logo by Mayor Galvin.  The logo embodies the essence of the pentathlon and the dedication it takes to be Olympic athletes.

Competitors will travel to Limerick from across the world, from as far afield as Japan, Korea, Chinese Taipei and the US to a host of European nations, including Great Britain, Hungary, Germany and France.

Overall attendance at the event, between competitors and supporters, could reach up to 1,000 people, not least due to Ireland’s proximity to Great Britain, one of the world’s strongest nations in the sport.

Speaking at today’s launch Mayor Liam Galvin said; “We are delighted to be hosting these World Championships in Limerick.  We have a fantastic sporting and cultural tradition and having these games here shows again just how welcoming and hospitable Limerick is.  We are really looking forward to having the games here and making sure that everyone who attends goes away having had a really positive experience of Limerick and Ireland.”

Project Coordinator for the games, Nickolas Boyle, said that Limerick’s sporting pedigree was very much to the fore in terms of its selection as the host venue.

“Limerick just ticked all the right boxes.  The fact that it’s shortlisted as European Capital of Culture 2020 says a lot about its ability to host these games but Limerick is also in a beautiful part of the country. UL as a campus also has everything you need for games like this.  Limerick is also very accessible, including internationally through Shannon Airport, and is a competitively priced location for staging events.  We’re delighted to be here and are looking forward to welcoming visitors for the games and, indeed, local people who want to come out and look at the individual events.  It really is an exciting competition and should be a great championships.”

With regard to the games and what the public can expect, he said; “The modern Pentathlon is a multidisciplinary Olympic sport comprising five different events that really define the perfect modern day soldier and a true Olympic athlete.  The Tetrathlon gives you four of these so it’s a really interesting competition.  We will have the cream of the crop internationally in terms of youth competitors.  Some of them compete in up to seven international events each year and, as the World Championships, this is the big one.  There will be a real Olympic feel to it and will whet the appetite for Brazil later this year as well.” 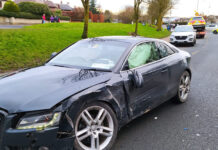