LIMERICK athlete and author Michael Collins is running 30 marathons in 30 days in memory of the 100,000 Irish immigrants who fled to Canada in the Great Famine.

His 787 mile ‘Irish Diaspora Run’ will also raise funds for a project to commemorate the 1847 passage of Irish emigrants to Canada during the Great Famine.

A native of Lifford Gardens on Limerick’s Ennis Road, 52 year-old Collins is author of ten books that have been translated into 22 languages. His novel ‘The Keepers of Truth was shortlisted for The Man Booker Prize in 2000.

He also holds the Irish national masters record over 100 kilometres and, as captain of the Irish National Team in 2010, won a bronze medal at the World championships. He was winner of the 100-mile Himalayan Stage Race and The Mount Everest Challenge Marathon, along with The Last Marathon in Antarctica and The North Pole Marathon.

On June 10, he embarked on a month-long run in Canada from the Grosse Île quarantine station on the Saint Lawrence River, 40kms north of Quebec, to the Ireland Park Famine Memorial in Toronto.

He is now looking to raise funds for plaques and statues to be erected at locations marking where Irish emigrants landed in Canada 169 years ago at Grosse Île quarantine station and along the routes travelled in 1847.

His aim is to ensure that the story of the Irish emigrants’ journey is marked in Irish and Canadian history and that the endurance of the Irish Spirit is recognised.

“The tragic passage of over 100,000 Irish people to Canada in 1847 aboard the infamous coffin ships resulted in the deaths of over 20,000. The land route the surviving immigrants took from Grosse Île to Toronto is strewn with more mass graves of Irish people than anywhere else in the world,” Michael told the Limerick Post.

“5,000 are interred at Grosse Île, 6,000 in Montreal and a further 1,500 in Toronto. The tragic history of that ill-fated year, along with the spirit of those Canadians, who adopted more than 2,000 Irish orphans, needs to be memorialised.”

The Limerick man, now living in South Bend, Indiana, covered 300kms in the first week of this marathon adventure.

“In reading the history of the 1847 immigration to Canada, I was struck by the enduring spirit of those who made the sea passage and then the harrowing 900km land journey from Grosse Île to Toronto. I felt the compunction to retrace the route. I consider the run a pilgrimage.

“My great hope is that we can share a collective memory and rightfully erect monuments along this 900 kilometre route, honouring our ancestors along with those courageous Canadians who ministered to the typhus-stricken immigrants and those who showed compassion in adopting so many Irish orphans.”

You can support Michael and the event at www.diasporarun.org. 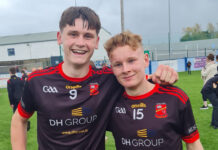