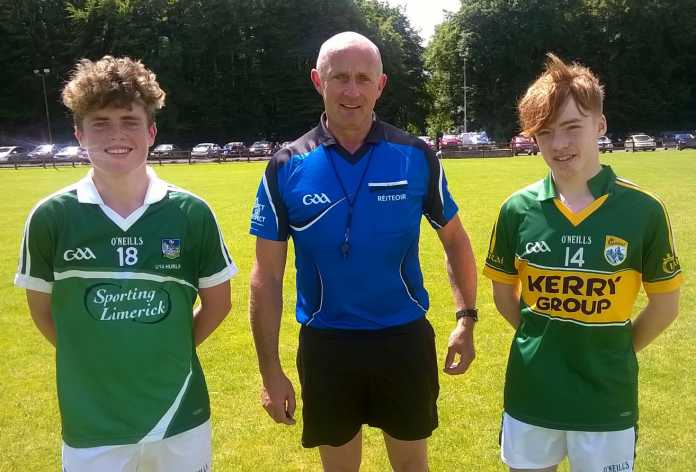 THE LIMERICK U14 football squad played in the Jim Power Tournament and were based at Bushy Park (Brickey Rangers GAA Grounds) on the outside of Dungarvan Co. Waterford. In their opening group game of the competition they lost to a stronger more physical Cork – Rebel Og East team 2-9 to 0-1. In their second game they played out an exciting 1-3 to 0-6 draw with North Kerry. With the teams also tied at half time 0-2 points apiece a Michael Southgate goal was the decisive score of the game. Limerick’s third game of the tournament seen them take on the host county Waterford. Limerick were quicker out of the block and at half time held a 0-3 point to no score advantage over their opponents. The second half proved a much tighter affair with both sides registering two points each. It was Limericks first half lead that seen them have enough to register their first victory of the tournament on a score line of Limerick 0-5 to Waterford 0-2.

Following this Limerick finished second in their group and as a result qualified for the Cup semi final were they took on the other Cork side Rebel Og West. In good first half display Limerick entered the break 3 points behind their opponents. However the long day and with this being their fourth game of the tournament , it eventually caught up with the Limerick side as they tired and struggled to get into the game in the second half and Cork rang out winners on a score line of 2-6 to 0-1.