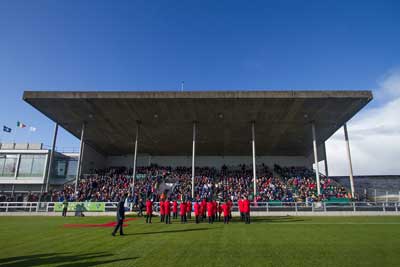 LIMERICK’S Markets Field will play host to a major final when the EA Sports Cup decider is staged at the Garryowen venue on Saturday September 17, with Limerick FC in action against St Patrick’s Athletic.
The First Division leaders were granted home advantage in Wednesday’s draw for that particular privilege and it will be the second (possibly third) meeting of the teams in the near future, with St Pat’s welcoming Martin Russell’s side to Inchicore in the FAI Cup next weekend.
In the meantime, the Super Blues could all but clinch promotion to the Premier Division this weekend if they defeat second from bottom Cabinteely at the Markets Field on Saturday afternoon (kick-off 2pm).
The kick-off time was notably brought forward in recent weeks to avoid a clash with the International Champions Cup fixture between Celtic and Inter Milan, which takes place at Thomond Park on Saturday evening at 7pm.
With Limerick’s closest rivals UCD and Drogheda United playing each other on Friday night, a draw in that game coupled with a victory on Saturday for the league leaders will give the Super Blues a 21-point advantage with seven games to play, in addition to a goal difference which would be at least 43 goals better than second-placed UCD.
Cabinteely’s away record in 2016 does not make for encouraging reading from their point of view. They have collected just one point from 10 away league games thus far, while their two matches against Limerick both resulted in straightforward wins for the table toppers, 3-0 at the Markets Field in April and 2-0 in Dublin in June.
Russell’s men go into the game having just about preserved their unbeaten league record last Friday night away to Drogheda United. Aaron Greene struck a stoppage time equaliser in a 3-3 thriller, with Limerick twice finding themselves two goals down to the Boynesiders.
Sean Brennan put Drogheda in front after just nine minutes and Gareth McCaffrey doubled the lead on the hour mark. Former Drogheda midfielder Paul O’Conor halved the deficit before Marc Griffin soon restored the home side’s two-goal advantage.
Lee-J Lynch found the net with 10 minutes to go to ensure a nervy finish and, right at the death, Greene’s header retrieved a draw for the Super Blues.
It was only the second time this season that Limerick dropped points, and the other occasion was also against Drogheda. That, too, was a close call, Ross Mann scoring in added time in a 2-2 draw on Shannonside in June.
Greene candidly admitted after Friday’s game that the league leaders were fortunate to remain unbeaten, saying “In the first half, to be honest, we were diabolical. Drogheda could have been two or three up.
“We came in half time, the gaffer said a few home truths and made a few changes. In truth, it could have been all ten of us. To go out second half, to come out and get a point to keep our unbeaten run going is the most important thing of all.”