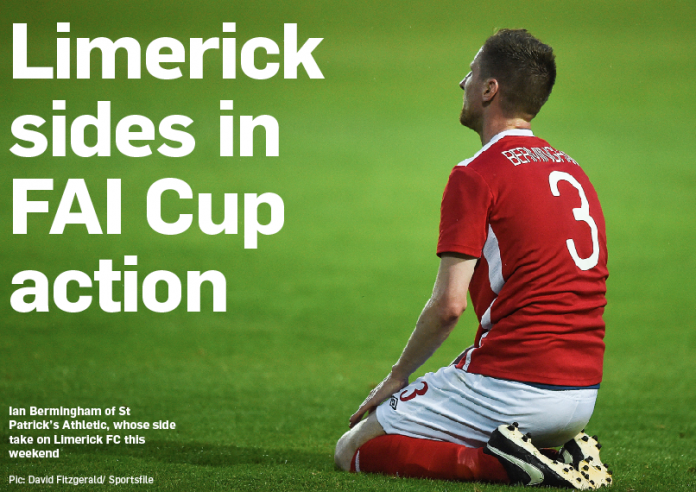 TWO teams from Limerick will be in FAI Cup third round action this weekend, with both up against Dublin opposition. First Division champions-elect Limerick FC travel to Richmond Park to face St Patrick’s Athletic on Friday night (kick-off 7:45pm), with those two also set to do battle in next month’s EA Sports Cup final, while Janesboro take on UCD in Belfield on Saturday (kick-off 7pm).
Both Shannonside teams will be the bookies’ outsiders to progress, but Limerick FC’s Aaron Greene is adamant that the Super Blues will have no inferiority complex against his former club.
He said: “We’ve got a great chance and we’ve nothing to fear. Why have we got anything to fear? We want to be playing against the best players in this country and this is what the club is going to be doing. It’s a great opportunity.
“St Pat’s play football in the right way and Martin has done the exact same here. We both have similar styles so it’s going to be a really good game. We’re similar in how we play but no matter what formation you play, there are still 11 players on the pitch [for each team] and the game is played on grass.
“What have we got to fear going there? I’m really looking forward to it.”
After Limerick’s recent win away to Derry City in the EA Sports Cup, manager Martin Russell knows that his players have what it takes to turn over Premier Division opponents.
He said: “The Derry performance showed that when we’re at it, we can be a match for a top side. We just haven’t had that challenge regularly so it will be interesting to see how we do this week. The good thing is that the Derry game gives the players the belief that they have that in them.”
The cup represents a change on focus from Limerick’s league duties after they effectively clinched promotion with Saturday’s 2-0 win at home to Cabinteely.
First half goals from Shane Tracy and Garbhan Coughlan secured victory for the Super Blues, who are 21 points clear with seven games to play and a goal difference advantage of 44 over second-placed UCD.
It was a straightforward affair for Limerick and Russell now believes that the job of getting straight back up to the Premier Divison is done, saying: “For me, it’s home and hosed. The performance didn’t hit the heights we want to hit.
“Having said that, we were in control and we probably should have scored more. Their keeper made a few saves and I don’t think Freddy [Hall] had a real save to make. We’ve got that out of the way now and we can focus on the big one this week against St Pat’s.”