A GRANTS bonanza, which will be worth almost €18 million, has been announced for the county to help fund projects ranging from a state of the art athletics hub to resurfacing a car park.

The multi-million figure is calculated when matching funding for various projects is taken into account.

Members of Limerick City and County Council were informed at their September meeting last Monday that among the major projects being funded are the Lough Gur Greenway and Solstice Park which will benefit from a €1.1 million allocation.

The Great Southern Trail, is set to benefit from a €1 million allocation and €500,00 has been set aside to fund the installation of 70 CCTV cameras to combat rural crime and anti-social behaviour at various locations around the county.

€853,032 has been allocated for building and restoration works at Nicholas Street in Limerick City centre.

Smaller projects include €247,000 for a pedestrian bridge in Kilmallock and €51,000 for a social cohesion project in Rathkeale involving the settled and Traveller communities.

€250,000 has been set aside for village renewal in Patrickswell. €109,250 has been allocated to each of four areas for improving public areas through mending footpaths and other public works.

The allocations are going to Adare/Rathkeale, the Metropolitan District of Limerick City, Newcastlewest and Cappamore/Kilmallock.

The money is being allocated under various headings and comes from council coffers and Fáilte Ireland’s tourism promotion budget.

After announcing details of the funds, Council chief executive Conn Murray said that the projects chosen for funding “will improve tourism, leisure and urban renewal across county Limerick while increasing the attractiveness of Limerick as a place to live, work and visit”. 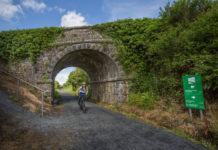