LIMERICK FC confirmed this week that Martin Russell will remain on board as the club’s manager for the 2017 season, following some speculation over his future during the autumn.
In contrast to when they last won promotion four years ago before dispensing with the services of Pat Scully, the club decided this time that continuity was the best option, understandably keeping faith in the man who emphatically guided the Super Blues to the First Division title with 23 points to spare over second-placed Drogheda United.
The ex-UCD manager, who has been in charge of Limerick since July 2014, spoke of his satisfaction at agreeing terms with the club to lead them in the Premier Division next year.
Russell said: “I am happy to be playing my part in trying to progress Limerick FC and to help establish the club as a real force in Ireland’s Premier Division.
“We have a real task on our hands but I believe we can look forward to a season that sees the club continue to grow and work towards maximising its potential.”
Limerick chairman Pat O’Sullivan firmly expressed his faith in the manager, alluding to his preference for attack-minded football while pledging to actively support him as the Super Blues prepare for their Premier Division return.
O’Sullivan said: “Martin’s teams always play an attractive style of football and we look forward to assisting him in every way possible to ensure that Limerick FC makes a positive contribution to the Premier Division going forward.”
Despite narrowly failing to keep the Super Blues in the top flight in 2015, Russell has a proven track record in beating the drop, having done so on several occasions with UCD in previous years. However, he will no doubt have his sights set on ambitions far higher than simply avoiding the drop zone next season. 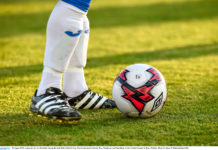