Home Lifestyle Arts Life and death at The Hurlers A BOOK of poetry exploring the themes of life and death, pleasure and fear, and separation within society is to be launched at The Hurlers in Castletroy on Monday, November 21 at 8.30pm.

By the Black Castle is the second collection of poems released by local author, Seán Ó Roideacháin, following his acclaimed debut, Under the Black Bridge.

With a reputation for exploring modern-day themes from an original viewpoint with raw, unflinching honesty, Ó Roideacháin’s has quickly established himself as one Limerick’s finest new poets.

Since graduating from the University of Limerick in 1976, Mr Ó Roideacháin has worked as an industrial engineering consultant and part-time sports journalist. He has also spent periods as an aircraft appraiser, incinerator salesman, software developer and political aide.

The book is published by Revival Press (an imprint of The Limerick Writers’ Centre) under their Community Publishing initiative and will be launched by local author Micheál Ó Siochrύ. Attendance is free. 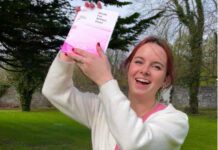