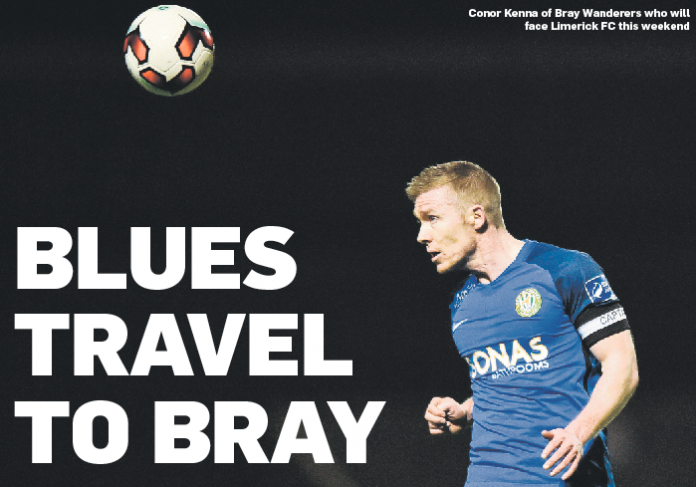 LIMERICK FC needed a Rodrigo Tosi header to avoid a third consecutive defeat last Saturday, the Brazilian’s second half equaliser ensuring a 1-1 draw against Finn Harps in a bad-tempered encounter at Markets Field.
A mistake by Freddy Hall gifted Sean Houston with the opening goal for the Donegal visitors midway through the first half, but Tosi found the net with just under 20 minutes to go as Limerick earned a share of the spoils.
They almost grabbed a late winner when Robbie Williams’ header struck the post, but as he went to make contact with the ball, he was being held in the penalty area, unbeknownst to referee John McLoughlin.
Limerick manager Martin Russell admitted that a draw was a fair reflection of the game overall, saying: “It was a difficult game in many ways. We didn’t play as well as we’d like to play and as the clock starts ticking down, you’re wondering if you can get something out of it.
“We gifted them a goal and other than that they’ve not had a lot going forward. They were dogged and they worked hard. It wasn’t a great footballing spectacle and we didn’t do enough offensively.
“At least we dug [a result] out, so there’s some credit there for the lads. We didn’t deserve to lose the game but we didn’t do as well as we would have liked.”
Limerick’s next fixture sees them travel to the Carlisle Grounds on Saturday to take on Bray Wanderers, who have won both of their home games so far this season but lost at Sligo Rovers last weekend.
It’s a game that is likely to see Bray’s Aaron Greene line up against the team he helped to promotion last year.
The Super Blues had been due to play their rescheduled fixture against Derry City last Tuesday, but the game was postponed following the tragic and sudden death of Derry captain Ryan McBride on Sunday night.