THE Catalpa first sailed to Limerick with Tom Crean at the helm in 2002 at Belltable. The Annascaul voyager to the Antarctica, with Scott and then with Shackleton, won all hearts with the wild imaginings of Aidan Dooley whose work this is.

He fought his way to Limerick (on stage, with ropes) in bitter winds, biting snow and lavish gales in 2003, into 2011 and 2015 more recently. Yet so admired is the show ‘Tom Crean – Antarctic Explorer’, that the audience for it swells with the Scotia Sea.

Attend to this epic feat of courage on the part of Crean, a Kerryman who was exceptional sailor and modest hero, at Lime Tree Theatre on Thursday 13, 8pm.

Arts page talked to Aidan Dooley as he was soundchecking Siamsa Theatre in Tralee; another sell-out performance.

What fuels his passion in this greatest adventure ever told?

“I know that Crean’s story motivates and inspires people so deeply… It is like as if the story reaches into their lives and talks to them at some level.

“For me, the challenge is to tell the story as succinctly, as emotionally as you can and to keep the simple images in my head that keep the show working, And people layer these other elements on to it.

“I do feel it is a piece of art and that people do communicate with it”.

Dooley casts a net over each performance, trawling forensically, looking to smack back a clause here, a move there. He goes on to angst a little about the boat ride from Elephant Island to Georgia in the previous night’s play. Was it tight enough, strong enough..

“Physically the gestures are almost choreographed at this stage. It’s important to me that I don’t get lazy, that the pace of the story follows my imagination”.

Survival, salvation, the themes are big. You can read of them in Dooley’s book, ‘Travels with Tom Crean, Antarctic Explorer’, available at the theatre and signed by the actor/ writer.

Our time again to witness Crean’s battle of wits and doggedness against oceanic might. www.limetreetheatre.ie 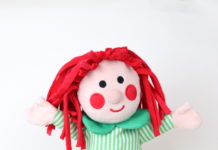 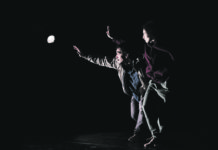 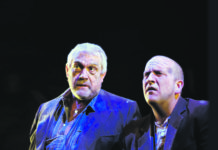