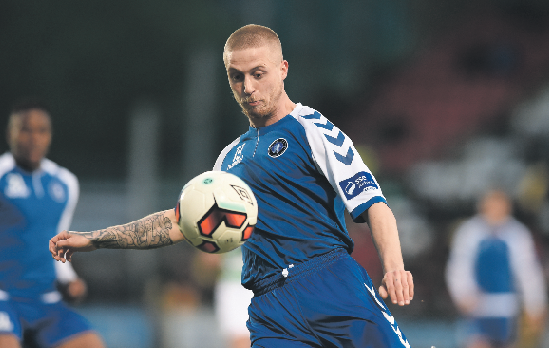 LIMERICK FC completed the first set of Premier Division fixtures in the top four after a third consecutive 1-1 draw last weekend against Shamrock Rovers.
Having let leads slip in their previous two games against Galway United and Derry City, the Super Blues were on the other side of the coin in Tallaght, with Rodrigo Tosi netting the equaliser in stoppage time.
Shamrock Rovers took the lead in the 18th minute through a Roberto Lopes header, Limerick being undone from a corner, and the visitors’ evening got worse when Paul O’Conor was forced off through injury.
However, Willie Boland’s men dominated the second half, although that pressure looked set to go unrewarded. That was until Tosi finished off a low cross from Chiedozie Ogbene to give Limerick the point that their performance deserved, a view that Boland championed afterwards.
Limerick’s interim manager said: “I was delighted with the result. I felt that [a draw] was the least that we deserved.
“I thought the boys were excellent – in the second half of the first half and the whole second half I thought they put Rovers under a lot of pressure.
“I felt we played some excellent football. We came out in the second half and I thought we dominated the game. It’s encouraging, the fact that we went behind and got a result in the end.”
The Super Blues begin the second set of league fixtures with a trip to Sligo Rovers on Saturday, with a 7:45pm kick-off at The Showgrounds.
Limerick will have very fond memories of the last meeting between the teams, a 5-1 victory on the opening day of this season. But much has changed in the intervening 10 weeks, with Martin Russell and Dave Robertson both vacating their managerial posts since that game.