Home News Local News What would Terry have said about his bronze sculpture? 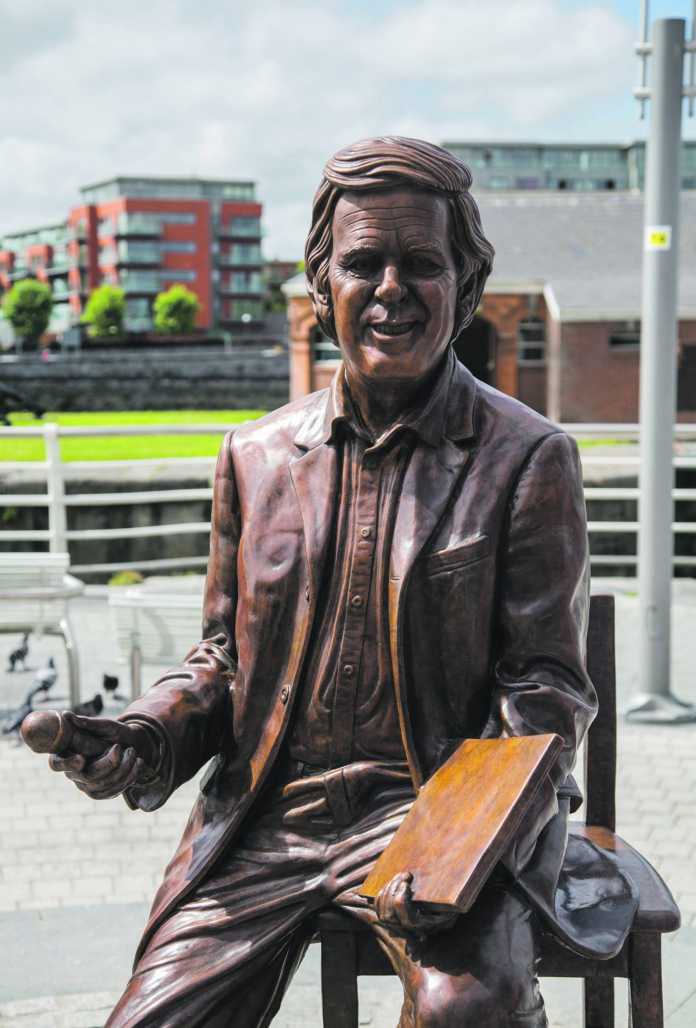 “WHO knows what hellish future lies ahead? Actually I do, I’ve seen the rehearsals.”

This, the sharp wit of Terry Wogan on the Eurovision finals in Finland in 2007 came to mind after a bronze sculpture of the well-loved Limerick broadcaster was unveiled in his native city last weekend.

What would Terry have made of it, I wondered.

Wogan, a Freeman of Limerick City, once said, “inanimate objects fight me. They are not susceptible to persuasion or cajolery.” He was referring to a Meccano set that he received as a child from his Aunt May and deemed it the “worst present” he ever got in his life.

This got me to thinking that whether he liked or loathed this bronze sculpture, he certainly would have made no secret of his feelings either way.

Wogan always struck me as unassuming and down to earth character. Somehow I can’t imagine he would have liked all the fuss, yet still large crowds of admirers, curious tourists and fan club members gathered at Harvey’s Quay last Saturday for the unveiling of his sculpture.

In one of his last official functions as Mayor of the City and County of Limerick, Cllr Kieran O’Hanlon welcomed past colleagues of Terry’s from the BBC and the Children in Need charity and members of the TOGs (Terry’s Old Geezers and Gals) fan club who had travelled from Britain to be at the official unveiling ceremony.

“Today, we honour a man who, certainly across the water, was our greatest export. Terry meant many different things to many people, but to all those he meant an awful lot. There was a huge outpouring of grief when Terry passed away last year and it is only fitting that we remember him in his home city,” said Mayor O’Hanlon.

“Terry has a special place in our hearts, and I hope those memories can be re-lived by fans with the unveiling of this sculpture, right in the heart of the city of his birth.”

The sculpture made from bronze by award winning artist Rory Breslin sees Terry seated on a chair with microphone in hand preparing to have another one of his infamous chats.

“As Limerick is his home place I want to celebrate the man’s skills but also to see the relaxed Terry, engaging and familiar to us all. He was a genial man, quick to smile, cheerful and warm. I hope this piece conveys that. That is the challenge in making a sculpture like this — to capture the nature of the person and to make sure it works in the context it will be located,” artist Rory Breslin explained.

Still, I can’t help wonder what Terry would have thought of the sculpture, which has met with mixed reviews across the city and whose likeness has been compared to everyone from Jimmy Hill to Larry Gogan, Nick Cave and Donny Osmond.

But then I remember the amiable broadcaster himself once saying, “Go out and face the world secure in the knowledge that everybody else thinks they are better looking than they are as well.”

Wogan received the highest honour possible when he was made a Freeman of Limerick in 2007 and was given a special lifetime achievement award by Limerick Person of the Year.  The University of Limerick conferred him with an honorary doctorate of letters in 2004.