RESIDENTS in Kileely are furious at a proposal by Limerick City and County Council to build two social housing units on 12 parking spaces, which they say are used for visitors to St Munchin’s Community Centre.

A spokesman for residents in Kileely Court this week described the move as “ridiculous”.

Residents claim that when the community centre is at its busiest, they have enough difficulty getting in and out of their homes because of the number of vehicles parked outside.

They feel that building two houses on the 12 parking spaces will make matters worse.

“The council got funding to build new houses in the existing housing estates, but I can’t see how this will resolve the crisis. It is not the answer,” one resident said.

“A local man recently missed a hospital appointment because he couldn’t get out of his driveway with his car. Things came to a head after that and the Gardaí were called. They now want to build two houses on these 12 parking spaces. It is going to make things even worse than they already were.”

Fianna Fail TD  Willie O’Dea also maintains that at certain times during the week, residents can barely get in and out of their houses because of the number of visitors to St Munchin’s Community Centre.

“If the proposed housing goes ahead and the parking spaces are removed, it will have a very negative impact on an already fraught parking situation,” he claimed.

According to Deputy O’Dea, much of the problem is as result of the success of the centre and the many services offered, especially for the elderly of the wider community.

“The management of the community centre are working with local residents and the council to find a solution to the current problem but both they foresee huge parking problems in the future if the 12 spaces are taken away by the council to build houses on.

“I have had a senior official from the Traffic Management section of the council out at Kileely Court only last week trying to deal with the serious parking problem, never mind the proposal by the council to remove 12 parking spaces.

“The Council have carried out preparatory work in the area to advance their plans for the new houses which will be situated at various locations in De Valera Park and surrounding areas. They have told me they will organise a public meeting in the near future and when they apply for planning, the residents can also make their views known on what is proposed,” Deputy O’Dea explained.

A spokesman for the local authority stated, “As part of Limerick City and County Council’s programme to meet the demands for housing, the Department of Housing has approved plans to construct 10 homes in the Thomondgate area.

“The current housing waiting list at the end of June stood at 3,160, and this development will help to reduce this number. The original proposal saw the construction of six 3-bedroom homes, two 2-bed homes and two 1-bed homes for families who are currently on the waiting list.”

The council says that a meeting has been held with representatives from the local residents committee and further meetings are planned with members from the area in the very near future. A design team has also been appointed to design the homes as part of the whole development process.

“These designs will be sent forward for Part 8 planning and members of the public will be able to make comments and submissions as part of the normal planning process. It is important to note the decision to grant Part 8 planning lies with the local representatives,” the spokesman concluded. 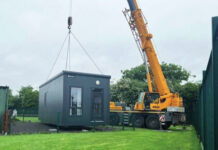