KEITH EARLS is among 11 changes to the Munster team that suffered a St Stephen’s Day defeat to Leinster for their Guinness PRO14 clash with Ulster on New Year’s Day.

Earls makes his return to action in the outside centre position. He had been expected to play his first game since picking up a hamstring injury with Ireland for the Leinster game but cried off due to illness. Sammy Arnold partners him in midfield.

Billy Holland continues in the second row and takes the captain’s armband from Peter O’Mahony for what will be his 16th consecutive game as a starter. He is joined by Darren O’Shea in the second-row.

Tommy O’Donnell also keeps his place in the side but moves from openside flanker to the blindside flanker position. That allows Chris Cloete to return to the team at openside with Jack O’Donoghue coming in for CJ Stander at number eight.

JJ Hanrahan replaces Ian Keatley at out-half and there is also a change at scrum-half with Duncan Williams getting the nod ahead of James Hart. Conor Murray is rested.

Young Munster’s Calvin Nash gets his first start of the season on the right wing, while Alex Wootton and Simon Zebo completing the back three.

There is also good news from the bench with the return to action of Ronan O’Mahony for the first time since last April. There could also be a debut for Jeremy Loughman, who joined from Leinster on a three-month deal in early December. 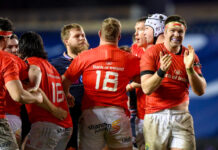