Following the conclusion of a post mortem examination today, investigating Gardaí at Henry Street station in Limerick have now launched a murder investigation.

The post mortem was conducted by State Pathologist Marie Cassidy after a man’s body was found on Sunday night at a flat on Little O’Curry Street which adjoins O’Curry Street and Windmill Street near the Dock Road.

The dead man has been formally named as 45 year-old Martin Clancy.

Gardaí have renewed their appeal for witnesses and are particularly anxious to speak to anyone who may have seen Martin or spoke to him since Monday, January 1 to contact the incident room at Henry Street on 061-212400, the Garda confidential line 1800 666 111 or any Garda Station. 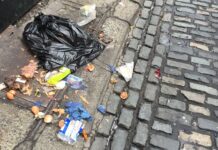