THE urgent need for traffic calming measures at a West Limerick secondary school was on the agenda at council offices in Newcastle West this week.

Addressing councillors at the municipal district’s monthly meeting, principal of Scoil Mhuire agus Ide, Sheilagh O’Mahony-Kennedy claimed that up to 400 vehicles pass the access gate to the school at Bóthar Buí in a 15-minute period between 8.30 and 8.45am each morning. She described traffic at the post primary school, which has seen its numbers almost doubled to 635 students in the last few years, as a “massive hazard” before urging local representatives to action before an accident occurs.

Miss O’Mahony-Kennedy told councillors that efforts had been made by the school to make traffic flow less congested and safer for children but said it remained “chaotic” and needed to be addressed.

Director of Services for Newcastle West Municipal District, Gordon Daly, told her that the local authority were aware of the traffic issues and vowed to take a “holistic” approach while also taking an overview of traffic issues elsewhere in the town.

Senior executive engineer Ben Noonan reiterated these comments and said Limerick City and County Council would work with the school and look at “all the options available”.

“We are actively looking at this,” he commented.

Cathaoirleach of Newcastle West Municipal District, Cllr Michael Collins (FF) said the problem was “there is no solution to offer at this time”.

“It is a real difficult problem,” he added.

Fine Gael councillor John Sheahan proposed that the council write to the Department of Education calling on them to put a plan in place to address traffic management issues for schools.

“It is also a sign of the times that we are living in that parents can’t let their children walk to school. It is not safe anymore,” Cllr Sheahan said.

“This is a real legitimate concern and it would be negligent of us not to act,” he concluded. 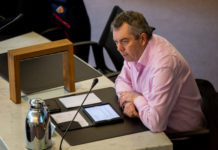