LIMERICK readers will have a chance to meet and hear one of the best of a new generation of Irish writers when author Billy O’Callaghan gives a reading at the Rathkeale Arts Centre this Friday.

The Cork-born and based writer has, over the past 20 years, produced three short-story collections and one novel with a second on the way and has won prizes and a lot of rave literary reviews.

He is, insists novelist and Booker prize winner John Banville, “the real thing.”

“Billy O’Callaghan’s work is at once subtle and direct, warm and clear-eyed, and never less than beautifully written. ” John Banville has said

Billy himself has taken it all in his stride. “ I count myself lucky to have understood, from quite early on, that what matters more than anything else, more than prizes, sales and festivals, is what goes down on the page. That’s the only thing a writer can really control.”

“Having never attended university, I learned to write purely by doing, by reading and writing. It takes me a long time to write a story—longer, it seems, with each passing year. But there’s no hurry. Everyone finds their own way of working.”

Billy’s three collections of short stories include In Exile, In Too Deep, and The Things We Lose, the Things We Leave Behind which was Cork’s One City, One Book choice for 2017. The title story of that collection won a Bord Gais Energy Irish Book Award and another story, The Boatman was runner-up for the 2016 Costa Short Story Award. His short stories have appeared in more than a hundred literary journals and magazines worldwide.

Billy’s first novel, The Dead House was published last year and will be published in America later this year. A second novel, My Coney Island Baby, is due out early in 2019.

He will read from his work at the Rathkeale Arts Centre at 8pm this Friday, February 16. The reading is one of a series hosted by the Rathkeale Community Arts Group with support from the Creative Ireland initiative.

The Rathkeale Arts Centre is located upstairs over the public library in the council offices on the Ballingarry Rd, Rathkeale. The centre is wheelchair friendly and there is no admission charge. 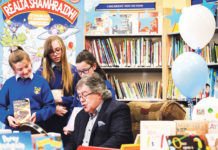 Special invitation to the library for Limerick’s young literary stars

Literacy Week focuses on the little things in life