LIMERICK’S senior hurlers remain unbeaten in the Allianz Hurling League after seeing off Dublin in a one-sided match at the Gaelic Grounds last Saturday.

John Kiely’s side were too good all over the park for a Dublin side that never came close to troubling Limerick.

Patrickswell’s Aaron Gillane top scored for Limerick with 1-9, his goal coming from a penalty in the 23rd minute. Feohanagh’s Seamus Flanagan enhanced his reputation at this level with another impressive performance.

Elsewhere, Declan Hannon cruised through the 70 plus minutes on his return to the team after a hamstring injury, while Sean Finn, Dan Morrissey and David Reidy also shone.

Limerick travel to Antrim this weekend in their second last game of the 2018 campaign. A quarter-final place is already secured, but Kiely warned post-game that the Antrim game will provide a real test as he is set to be without his UL contingent.

That could mean that Limerick could be without five of the team that played against Dublin as Finn, Gearoid Hegarty, Tom Morrissey, Barry Murphy and Pat Ryan have all seen some action with UL in this season’s Fitzgibbon Cup.

Na Piarsaigh’s Ronan Lynch and Mike Casey (unavailable for Limerick due to club commitments) could also feature for Gary Kirby’s side. 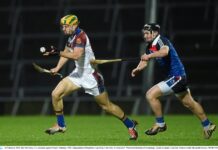 On This Day: Footballers lose League outing with Clare and UL contest Fitzgibbon Cup finals in 2015 and 11′