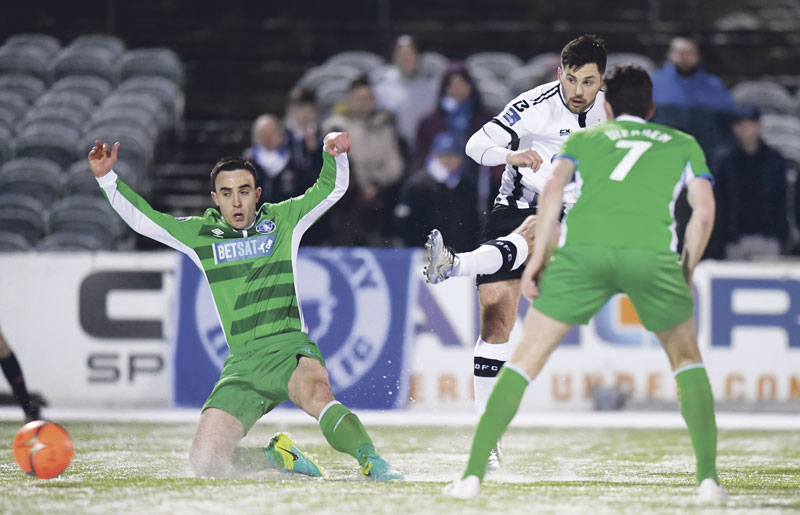 ON A freezing night in Oriel Park, Limerick FC were left feeling cold in more ways than one after a sobering 8-0 defeat to Dundalk punctured some of the feelgood factor that had accompanied the early weeks of 2018.

The Lilywhites had not scored in their first two Premier Division games but cut loose against Limerick on Tuesday, consigning Tommy Barrett to his first defeat since taking charge in January.

Dundalk were four goals to the good at half-time, with Pat Hoban registering a brace and Robbie Benson and ex-Limerick defender Stephen Folan also on target. Second half goals from Karolis Chvedukas, Michael Duffy (two) and Dylan Connolly piled on the misery for the visitors on a difficult night on the east coast.

Three days previously, Barrett was denied his second league win in agonising fashion after Limerick conceded a stoppage time equaliser to Bohemians at Markets Field in their first home match of the season.

After a tepid, goalless first half, the impressive Cian Coleman scored from close range in the 57th minute and the Super Blues were on course for maximum points until Eoghan Stokes levelled for Bohs at the death. There was an element of controversy about the Gypsies’ goal as Rob Cornwall, who provided the assist, appeared to be offside.

Barrett described it as “a fair result” afterwards, despite the concession of the contentious last-gasp equaliser, adding: “We need to learn from it. We need to get up the pitch quicker. It’s hard to know [if it was offside] from where I was standing but you don’t give the linesman an opportunity in that situation. Everyone needs to get out together and make sure he’s offside and give the linesman an easy decision to make, but it is what it is and we move on.”

Prior to kick-off against Bohemians last weekend, a minute’s silence was held in memory of Dessie McNamara, a member of Limerick’s 1960 league-winning side who died recently.

The Shannonsiders are back at Markets Field this Saturday evening when they host Shamrock Rovers, who enjoyed a 6-0 win over Bray Wanderers earlier in the week. Kick-off on Saturday is at 6:30pm.