On Saturday afternoon we welcomed Rathkeale to Ballysteen for our third All County League game of the championship. With a win and a draw under our belt already in the competition, a win would have put us in good contention with a number of fixtures coming up in the next couple of months.

We started brightly in perfect conditions for football and opened a healthy lead within the opening 10 minutes with a Mark Ranahan penalty putting us 1-4 to 0-2 ahead. With our defence well on top in the opening period we had a healthy 1-12 to 0-6 lead at the half.

Yet Rathkeale to their credit never gave in and had the opening three scores of the second half in quick succession. Rathkeale never relented and had the deficit reduced to a goal with 10 minutes to play.

With scores hard to come by for us in the second half, our team as a collective dug in hard to keep them at bay late on to secure a hard-fought victory with the score reading 1-14 to 0-16 in our favour at the end. Team: Conor Ranahan, Jason Daly, Kevin McMahon, Conor Enright, Evan O’Donoghue (0-1), Shane Gallagher, Cillian Ferris, James O’Meara (0-2), Paudie Vaughan, Patrick Moran (0-2), Mark Ranahan (1-6), Sean Whelan, Jack Neville (0-1), Shane Hallinan (0-2), Maurice Somers. Subs used: Bill Casey, David Holland.

Our Junior B’s put on a sparkling display of football on Sunday afternoon to get our first victory of the season, winning out 0-17 to 0-6 against Athea in Ballysteen.

After a disappointing loss to Knockaderry the previous week, we wasted little time in stamping our authority on this game opening up a 0-4 to 0-2 lead within the opening 12 minutes. At half time we had extended our lead to 0-8 to 0-4.

The second half followed the same suit with our defence limiting Athea to very little. which was shown in their return of only two points in the second period.

Contrastingly, up front we had a number of scorers, led by the impressive Jamie Moran who notched 0-9 from play and placed balls.

West Senior Championship against Fr Caseys on Tuesday @7.15pm in the Bog Garden.

Cappamore had two teams taking part in the County U8 Blitz which took place last Friday evening. It was a very enjoyable night with both our teams doing us proud.

East Junior A & B Football League

Cappamore started well and were three points up midway through the first half. Oola then got a goal and a few points and were two points up at halftime.

Despite both sides putting on strong pressure in the  second half, and Cappamore unlucky with a number of goal chances this margin remained to the end. Final score. Oola 3.8 – Cappamore 2.9

Tickets available in The Kingdom Bar, The Hill Bar, The Welcome Inn, Meade’s Shop, OPTP, Creed’s, Fogarty’s or from any committee member

Dates for your Diary

Underage training continues every Monday evening from 7pm to 8pm for kids under 6 to under 12, U6’s need to be attending primary school.

Well done to everyone who took to their feet on Saturday and Sunday. Saturday saw our younger competitors take to the grass as they ran in a variety of races from wobblier to mini teen followed by an obstacle race.

On Sunday 13 was the main event the 6K walk and 10K run which was a great success, congratulations to the winners- women were Jessica Coyne, Hilkk Kontro and Donna Hayes.

The men were Niall Shanahan, Colm Tucker and Declan Ginane. A very well done to the first club member back Breandán O’hAnnaidh, who after helping in the children’s run the day before played in the intermediate football match Saturday night and still had the energy to run and win the Pat Barron trophy which he accepted from Mike Barron.

A big thank you to all our committee members and to everyone who helped out over the weekend as stewards, administration or caterers.

Best of Luck to Seamus Hurley who will be wearing the Limerick Jersey on the Minor Hurling panel this year.

Congratulations to Aoife Morrissey, Ailbhe Larkin and Olivia Kerins who were part of the Limerick team which won the Munster Ladies U16B football title beating Clare by 5-05 to 1-06 in Mallow last Saturday.

Well done to the girls from Mungret St. Pauls who competed in the U14 LGFA All Ireland blitz in Portlaoise on Saturday12th of May for Limerick. Ciara O’ Keeffe, Ella Mason and Monica Sheehan

These teams are not strangers to each other. Monaleen were the winners in the Féíle final last year and as always both teams gave a cracking game.

An entertaining game with a lot of classic moves played in Mungret on Tuesday 8 May 2018. With evenly matched teams each score was equalled many times in the first half, only a point in it to Kildimo Pallaskenry at the break.

The second half started out more relaxed with a lot of wides from both sides and 3 chances on goal for Mungret St. Pauls missed. Kildimo Pallaskenry stepped it up in the last few minutes and popped in 2 more goals within minutes of each other to pull ahead and take the game.

The Mungret St. Pauls ladies U-16 footballers had a very hard fought victory over a gallant Drom/Broadford side in the final of the County League – Section B Cup final at LIT on Monday 6 May.

This bodes well for the Championship later in the year. A special word of thanks to the parents and supporters who attended at LIT on Monday.

Mungret St.Pauls U-15 footballs have been biting at the bit to get into an U-15 game and they eventually got one in the last game of the league with Fr. Caseys pulling out and NewCastle West conceeding their match to them they were delighted to get the game played in Askeaton on Wednesday 9 May. They played this in style and came out well on top.

On Saturday 12 May in Ballylanders, this was a one sided game but Mungret St. Pauls did not give up throughout.

Mungret St. Pauls know where to strengthen their weakness and will come back better from this game.

The Junior A Hurlers produced a strong performance to see off Na Piarsaigh in the City League semi-final. Patrickswell’s forwards were in a rich vein of form in the first half, while our defence were able to limit the Caherdavin men’s chances. By the half-time whistle, the ‘Well were ahead by 3-3 to 0-5.

The second half followed the same trend as Patrickswell controlled the possession and didn’t allow Na Piarsaigh to creep back into the match. The final result was 4-9 to 0-7 for the ‘Well. The final is scheduled for Saturday May 19. Congratulations to the team and management.

Congratulations to Roisin O’Brien, who was picked for the 2018 Limerick Primary Games Team. Well done!

The senior football team were back in action this week after a short break. First up was a defeat to Monaleen in the City Senior Football Championship. Next fixture is on Saturday in Caherdavin against  Na Piarsaigh at 4pm in the County League.

Big Congratulations to St Patrick’s  Diarmuid Hegarty who was named on the Limerick minor hurling panel for the forthcoming Munster Hurling Championship. We wish Diarmuid and Limerick the very best in the Munster Championship.

Well done to our U8s who  played Mungret, Claughaun and Kildimo/Pallaskenry in a City Football Blitz. St Patrick’s had one team with a number of the panel unavailable. The group were brilliant and enjoyed a great evening in Rathbane. U11/12 Footballers  played a game in Rhebogue. This is a very young panel they gave it everything  and with training over the summer, this team will continue to progress. Well done lads.

St Patrick’s u10 girls played Ahane  in Rhebogue. Well done to Paul, Barry and all the girls on a very skilful performance. Training continues every Tuesday evening at 6.45.

St Patricks girls also received their new jerseys from Lidl. Thanks again to Paul Doherty for his winning entry and Lidl for their continued support of ladies football. 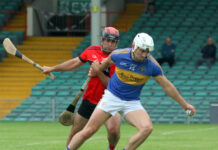 WATCH: Ciaran Carey happy to get back to action with a win in the SHC 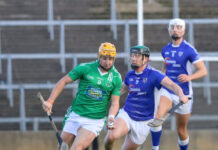 WATCH: Mungret and Kildimo Pallaskenry prepare to kick off the PIHC tonight 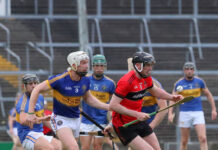