People in Limerick living with Inflammatory Bowel Disease (IBD) have been urged to contact Government TDs in their constituency to remind them of the urgent need to double the number of specialist IBD nurses, in line with international best practice.

The call was made by the Irish Society for Colitis and Crohn’s Disease (ISCC) after no additional IBD nurses were hired, despite Minister Harris saying he could see no reason why the doubling of specialist IBD nurses from 14 to 28 could not be accommodated as part of the recruitment drive for advanced nurse practitioners.

Approximately 40,000 people across the country have IBD, most of whom are diagnosed between the ages of 15 and 30. Furthermore, paediatric cases of IBD have increased three-fold in Ireland since 2000. Despite the prevalence of the condition, Irish research shows that 45% of hospitals across the country have no specialist nurse to treat these IBD patients.

Six months ago, on 16th November 2017, Minister Harris met with a delegation from the ISCC and received a petition, containing over 3,600 signatures, supporting the ISCC’s #DoubleUp campaign that aims to double the number of specialist IBD nurses in Ireland.

To highlight the days since the meeting with the Minister, the ISCC has launched a clock on its website which is counting upwards from the 16th November 2017.  The clock will remain live until the 14 additional IBD nurses are in place.

Dr. Glen Doherty, Consultant Gastroenterologist and Physician, St Vincent University Hospital who attended the meeting with the Minister last November said, “I would ask the Minister for Health to, at a minimum, double the number of Specialist Crohn’s and Colitis nurses in Ireland, as currently access to nursing care is not the same for everyone. The role these nurses play in IBD patients’ lives is incredibly powerful –  providing care and specialist advice on treatment and on living with inflammatory bowel disease day-to-day. The care of these nurses is literally a lifeline for patients, keeping them out of our overcrowded (and under toileted) Emergency Departments when their disease flares.”

According to Bruno Lucas, Chair of the ISCC, “We hope people living with IBD in Limerick will help us get the message to Government TDs that we want to see action taken on this matter.  When we first received the positive response from Minister Harris to our call for the doubling of the number of specialist IBD nurses in Irish hospitals we couldn’t have been happier.  Putting those 14 additional nurses in place will make a significant difference to the 40,000+ people living with IBD in Ireland.  Specialist IBD nurses provide detailed advice on treatment for the condition and on how to cope with IBD on a day to day basis.  This has a powerful impact on the level of care provided to IBD patients, but unfortunately not all IBD patients can access that level of care.

The ISCC has also reactivated its petition and is encouraging the public to sign it and support its call to double the number of specialist IBD nurses in Ireland. The online petition is available at https://www.change.org/p/ doubleup-for-ibd

As well as denoting six months since the petition was presented to Minister Harris, last week also marked World IBD Day which fell on Saturday 19th May 2018.

The original call to have the number of IBD nurses doubled arose from a survey of service providers treating patients with IBD, which found that the lack of dedicated specialist nurses in Ireland is the greatest barrier to delivering patient care. 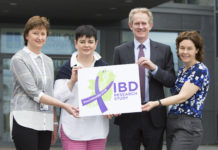