Liverpool might be high on the list of sporting conversations this week but it was also very much in the conversation at Shannon Airport today as new services to the city and another big UK draw, Bristol, were back on the airport’s schedule.

The Champions League final this Saturday was a topic on many passenger’s lips as they queued for their 2:50pm flight but the main emotion was one of satisfaction that the Shannon to John Lennon Airport service is back on the schedule.

Likewise, there was a similar sense of celebration an hour earlier at the same gate as passengers boarded a Bristol flight restored after a three years absence at Shannon.

The two services are in addition to an extension of Ryanair’s Manchester frequencies – going six times weekly – and will see an additional 60,000 extra seats at Shannon this summer. They will also bring to 17 the number of Ryanair services operating from Shannon this year, including a popular new Barcelona-Reus service launched last month.

With a 5% increase in passengers recorded in the first quarter, 2018 is shaping up to be a positive year for Shannon which will have 150 weekly departures during the summer season.  In addition to Ryanair’s growth, Shannon this year will also have its busiest transatlantic schedule for 17 years, with eight services operated to seven destinations.  Early next month it will commence its Toronto service with Air Canada.

Said Shannon Airport Managing Director Andrew Murphy:  “Today is another exciting day in a positive year so far for us and the wider region.  These new Liverpool and Bristol services not alone represent opportunities for passengers from Shannon to travel to what are two very popular cities but also represent a tourism opportunity for this region.  The UK is a huge market for us and it’s a case now of the promotional agencies getting in there and telling the story of the unique package we have here on the west coast to people who haven’t heard it before.”

Head of Aviation Development at Shannon Airport Declan Power said “These are two services that many members of the public were keen to see back on the schedule and we are delighted that Ryanair has answered the call.

“Ryanair is a very significant player not just for Shannon Airport but this region, as reflected in the number of services they will operate from Shannon this year. Our ask now is, having got these services back, that the public takes advantage and makes the most of them.” Mr. Power concluded. 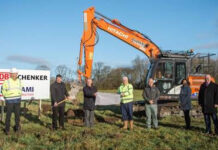