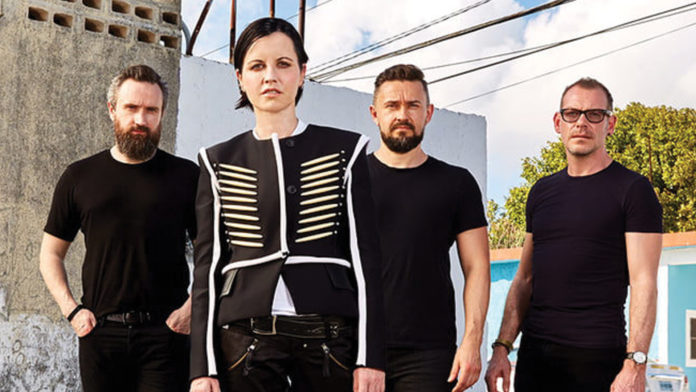 The Cranberries ask for privacy and update fans on recent developments

THE remaining members of The Cranberries have updated fans on upcoming releases and asked for privacy.

The statement reads that members of the band have been “inundated with requests for media interviews” and have been approached and requested to take part in commemorative projects since the untimely passing of Dolores O’Riordan in January.

The announcement thanks the fans for their ongoing support and goes on to say that the O’Riordan family and the band will not be responding to interview requests.
“Neither The Cranberries nor the O’Riordan family are in a position to respond to these requests or partake in any interviews or other projects. We would ask that you respect our wishes for privacy at this difficult time.”

In 2017 the four members of The Cranberries began recording a new album of songs. Producer Stephen Street, who worked on the band’s early albums, was at the helm for the new record. The album will be released in early 2019.

In late 2017 the band decided to compile a box set edition of debut album ‘Everybody Else Is Doing It So Why Can’t We?’
The box set will feature many rare versions of Cranberries songs, demos, radio broadcasts, concert recordings as well as unseen band photographs and a long essay about The Cranberries early years.
The box set will be released in Autumn 2018.

ON Tuesday June 19 at New York City’s Gramercy Theatre, LA based band Bad Wolves presented a $250,000 cheque to Dolores O’Riordan’s family onstage before performing their cover of Zombie to a full house.

Watch the video on www.limerickpost.ie

At the presentation was O’Riordan’s two sons, Donny Jr. and Taylor Burton, alongside their father Don Burton who accepted the cheque on behalf of their younger sisters, Molly and Dakota Burton.

Dolores O’Riordan was scheduled to record guest vocals with Bad Wolves on the day of her tragic passing. Record label manager Dan Waite of Eleven Seven Label Group, the band’s imprint, received voicemails from Dolores the night before her passing reporting that she loved the cover version.
“She was telling me Bad Wolves version was awesome and she could not wait to get into the studio.”

The band decided to release the track in her memory with all proceeds going to her four children. The unprecedented global success of ‘Zombie’ has resulted in the band raising $250,000, with a promise of more.

Lead singer of Bad Wolves, Tommy Vext says, “Our sadness the day Dolores passed was nothing compared to that of her children and her family. In light of the tragedy, donating our proceeds to her children was the only thing that made sense. The ultimate goal is to present them with a $1,000,000 cheque – and the fact we’re a quarter of the way there is beyond incredible.”

“The connection that people have to this song, the stories, the memories and the kids who are hearing this song through Bad Wolves for the first time – it’s a true testament to the timelessness of their mother’s songwriting that will live on forever, and we are so grateful to be able to do this for them.”

The cover version has been planted atop the iTunes Metal chart in the U.K. and Germany for five straight months. The official music video, a tribute to O’Riordan and an homage to the original, has garnered over 125 million views.

Their debut album ‘Disobey’ released in May via Eleven Seven Music, achieved the #22 spot on the Billboard Top 200. Bad Wolves will be touring extensively throughout the rest of 2018 with the ‘What’s In Your Head’ tour.