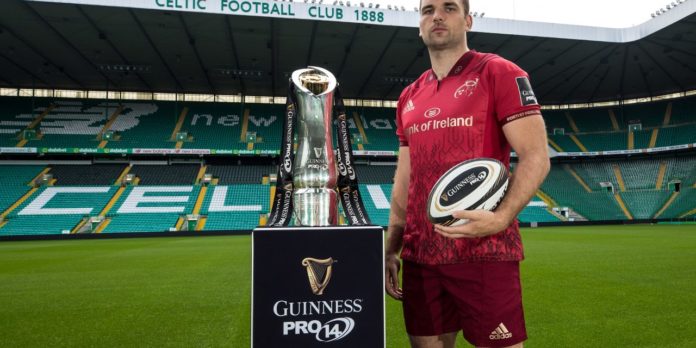 Munster’s new recruit Tadgh Beirne was named the Guinness PRO14 Players’ Player of the Season on what was a good night on the whole for Irish Rugby at the awards ceremony and launch night in Glasgow which marks the official start to the rugby season.

The former Leinster and Scarlets player was chosen by his fellow professionals from across the tournament in recognition of what was another season littered with standout performances. Beirne’s efforts also drew the attention of Irish head coach Joe Schmidt who handed him is first test cap against Australia during the victorious Summer tour down under.

His two-year deal at Munster now puts him firmly into the reckoning for Schmidt’s 2019 World Cup plans. It will be interesting to see how Munster and Ireland will strike a balance between giving Berine enough game time in the red jersey in order to make his case for inclusion in the green jersey.

Regardless, Beirne is another quality addition to a Munster squad who are now starting to add serious strength and depth in the squad.

However it was Munster’s rivals Leinster who took the lions share of the awards with Leo Cullen taking home the Guinness PRO14 Coach of the Season. It didn’t stop there as Jordan Larmour picked up the Honda Young Player of the Season award, while Barry Daly was recognised as the top try scorer.

Scarlets who finished runners up to Leinster also saw five players selected. The Glasgow Warriors saw two representatives as back row Callum Gibbins was nominated as the Dream Team captain. Ulster’s John Cooney was selected at scrum half.

This year’s awards ceremony also saw the creation of two new categories, the Tackle Machine award and The Ironman award. Cardiff Blues player Olly Robinson picked up the tackle machine award  by virtue of making a total of 243 tackles with a 94.6% completion rate.

Zebre’s Giulio Bisegni took the Pro14 Ironman award which recognised the player who registered the most minutes on the pitch across the 21 regular season rounds. The Italian international’s total of 1504 minutes earned him the award.

FairPlay Award: Scarlets (they picked up just two yellow cards over the season)