“It’s surreal, I feel like someone is going to shake me and wake me and tell me this has all just been a crazy dream. But the fact that it was so tough and hard earned makes it feel all the more special.”

Those were the words of John Kiely after the epic All Ireland victory over Galway in Croke Park yesterday. After 45 years of heartbreak, Limerick can once again call themselves All Ireland Champions. John Kiely, in just his second year in charge has guided Limerick to the promised land. His imprint on this Limerick side is so evident in their understanding of the gameplan and unwillingness to deviate from this even in times of trouble.

Limerick began the game like a freight train, opening a three point lead within five minutes of throw in. Galway responded like champions to lead after a quarter of an hour. Limerick replied with a goal a minute later and wouldn’t surrender the lead for the remainder of the game. Yet, despite their advantage, Limerick could have found themselves much further after accounting for six wides in the opening ten minutes and adding another five before the break.

With chances going to waste, other teams and managers may panic, but Kiely has his side prepared for any eventualities. He discusses how he spoke to his players before the game about missing chances and how to respond appropriately.

“We said that before in the dressing room. We knew there was going to be wides. That’s just the way it is but keep going for the next shot, keep going, keep hitting them. Don’t hold back and keep taking them shots on. We just had one to spare in the finish.”

The age profile of Limerick’s team has been a focus all year with majority of the side the right side of 23 years of age. This in addition to Galway’s experience of winning the title was seen as a key factor coming into the game, with Galway seen as slight favourites. However, Limerick, started much brighter than their opponents and looked like the defending champions.

Yet, Galway’s experience eventually told and led by their talisman Joe Canning, they reduced an eight point deficit to a solitary point with a couple of minutes remaining. Limerick to their credit responded like champions elect and held out to secure a famous victory and first All Ireland since 1973. Kiely illustrated his praise for the side commending their mental strength to win the game.

“It showed remarkable composure to withstand that onslaught. It wasn’t that we took our foot off the pedal, it was just an onslaught of them.”

When asked about how he felt during the game Kiely’s answer was somewhat jokingly different to how he looked on the sideline. 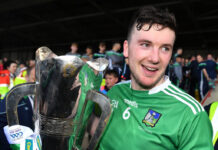