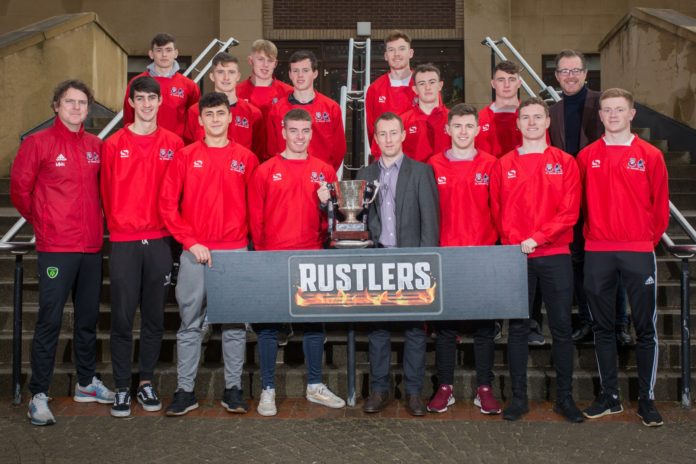 University of Limerick are set to host the final stages of the 2019 Rustlers Irish Universities Collingwood Cup in February for the first time since 2012.

University College Dublin are the current holders following their 2-1 defeat of Queens University in last season’s Belfast decider. The Belfield side have maintained their dominance of the competition with last year’s success totalling 44 outright successes and three shared wins since defeating Queen’s University 2-1 in Dalymount Park in 1914.

A potential rematch with Queen’s awaits Diarmuid McNally’s side in the Quarter Finals if they can overcome Mary Immaculate College in the First Round after the draw was made in UL on Friday afternoon.

University of Limerick have yet to win the Collingwood Cup and the last time a host university were successful was in 2003 when University College Cork were winners at The Mardyke beating University College Dublin in the final. Their 2018 ambitions ended with defeat to Maynooth University in last year’s first round and their 2019 aspirations may be tested again by the Kildare side after they were paired in the Quarter Final pending Maynooth overcoming Trinity College.

The Royal College of Surgeons will face the winners of NUI Galway and Ulster University in the last eight and the 13-time winners UCC will face Johnny McDonnell’s DCU with a potential semi-final date with the winners of Mary Immaculate College, Queen’s University, and UCD.

Rustlers, the Ultimate Fan Food, continue their partnership with Third Level Football and the Collingwood Cup. Speaking at today’s draw, Emma Yourell, Rustlers Marketing Executive said “Today’s draw is only the beginning of an exciting tournament culminating at the University of Limerick next February. Rustlers is proud to continue its’ support of Ireland’s oldest All-Ireland football cup competition, as part of our overall commitment to Third Level Football. We are hopeful of more excitement to follow on from the drama of last year’s competition.

Irish Universities Chairman, Terry McAuley, said: “I am delighted that the University of Limerick have agreed to host this year’s tournament. It promises to be a special occasion with the newly-developed top class facilities available to us through UL Sport. I would also like to thank our valued sponsors Rustlers for their continued support and I hope that the quality of this year’s tournament lives up to the historic standards of this prestigious competition.”