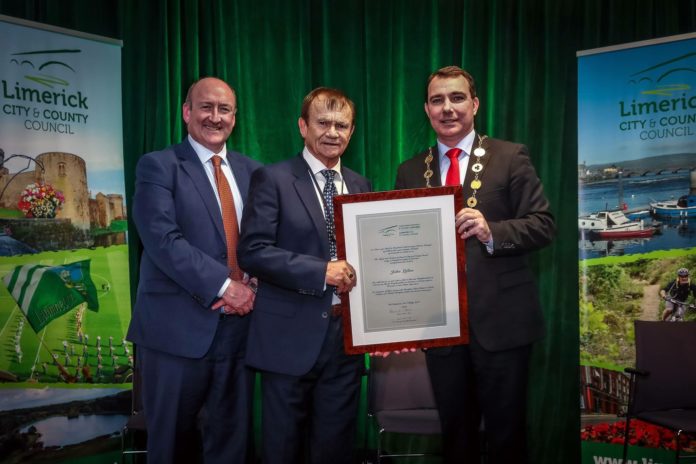 Mr John Loftus was honoured in recognition of his success with Transplant Team Ireland at World, European and British Transplant Games over the last 11 years. Known for his work with Limerick GAA, various financial services companies , Limerick Local Heroes and Mid West Mentoring, his accumulated skillset and perseverance have made him outstanding in the field of professional networks and coaching as well.

On Wednesday 12 last, welcoming the invited dignitaries, the athletes, supporters and media, Mayor of Limerick City and County James Collins told the community: “It is a huge honour for me to welcome you all here to acknowledge the phenomenal achievement of so many of our finest athletes.

“It has been a wonderful year for sport in Limerick and while our hurlers were celebrating their win, many of you were still battling, training and fighting for your own place in the history books.” Also honoured were Transplant Team Ireland’s Tara Madigan and Trevor Lynch, both from Limerick.

The Mayor went on to signify in particular those achieving in the Transplant Games. “The journey to success in sport is one of dedication, commitment and absolute single-mindedness.

“It can be a lonely journey, it can an exhausting and at times thankless pursuit. However, when I look around the room today I see people who have been remarkably successful, some of them in the face of almost unthinkable odds at one time in their lives.

“I’m speaking in particular to the amazing team of athletes who achieved personal success and raised awareness through their involvement in the Transplant Games.

“It’s one thing training every day when you are in the fullness of your health, but it takes a whole other level of personal strength and true grit to achieve what you have.

“And I am full of admiration for you Tara, Trevor and John. The importance of sport to communities and to families and individuals cannot be overstated.

“While it goes without saying you can take great personal pride in your victory, what I think is equally as important is the powerful example you have set for the generation of young girls and boys coming behind you.”

One of Limerick’s local heroes, John Loftus has been transplanted since September 2000 following a rare viral disease in 1992. One year after receiving dialysis from September 1999, he received his successful kidney transplant. He got involved in the Transplant Games a decade later. He proved to be on top of his game and an astonishingly competitive and high achieving athlete ever since.

Speaking to the Limerick Post, John makes the point that he has represented Transplant Team Ireland at European Games in Ljubljana in Slovenia, Wurzburg in Germany, Dublin, Zagreb in Croatia and Krakow in Poland.

“I have competed in World Games Bangkok in Thailand, at Gold Coast City in Australia and Gottenburg in Sweden and in British Games in Belfast, Newcastle and Birmingham.

“In those international level games I have been fortunate to win 15 Gold, seven Silver and three Bronze Medals. I took the Gold in 100m and 200m Athletics including a record breaking eight 100m Golds unbeaten in successive games.”

Now leading the Mid West Mentoring business network, John was at the heart of vitalising Limerick Local Heroes, a committed group of volunteers, sports people and community leaders, to work for the betterment of Limerick city and citizens. Limerick Local Heroes is a community driven, not for profit initiative that aims to energise Limerick people from all walks of life to create new and sustainable jobs for us all. Established during the recession years when the city was ravaged by emigration, joblessness and low morale, LLH looked to consolidate an entrepreneurial spirit and work as a forum for ideas and activity embracing culture, sports, business, services and charitable projects.

John sets the context for his influential business networking organisation, Mid West Mentoring. Membership ranges from media professionals to manufacturers, to those expert in the food sector, banking and all sorts of services. Mid West Mentoring is a growing phenomenon that drives business in a supportive environment, introducing companies to leads and services that oblige their requirements.

“It was October 2016 and a group of business people approached me and asked me to set up a business network group that would, on a no-nonsense basis, provide a platform for businesses to network and pass on referrals to each other in an uncomplicated manner.

“We started with 16 members and have grown that group organically to now have in excess of 60 members. I personally meet all prospective candidates to allow them understand the process we use and to educate them on the best ways to grow their businesses.”

“The success stories from the group give me incredible job satisfaction,” John states. “These stories range from start ups getting their biggest new client of the year, to the personal development of some new members or securing three months work from a service provider in this group.”

John makes the point that he has a background in networking and mentoring that he feels made for a distinct advantage over other network organisations.

“Fifty years in business can allow this,” says the voice of experience. “Also my sole interest is that group members get business which ensures the growth of the group. No other network group in the area has someone in a similar role.”

“I think that networking should be pressure free and endeavour to be as welcoming as possible to allow people flourish and use their unique talents to benefit the overall group. All newcomers joining the group do so in a fully voluntary capacity.

“Furthermore, with Mid West Mentoring the commitment is low.

“A large meeting ever other week is standard and a mini meeting on the alternate week where a more intimate atmosphere allows us to find out more about each other’s business. Each meeting is chaired by myself and I will endeavour to use my own contacts to further your business.”

Each meeting takes an hour and the emphasis is on business:

“Tipperary, Kerry, Clare, Limerick, Galway and Cork form the base territories of members. We have All Ireland winners and champion dancers as part of the group, with the variety in our membership base a huge part of the appeal.”