THE cycling infrastructure in Limerick City is inadequate and requires significant development, according to local election candidate Elisa O’Donovan.

Ms O’Donovan, who will represent the Social Democrats in next May’s election, said that there has been no significant improvement to the Coca Cola bike sharing scheme since it was introduced in 2013.

She described the current infrastructure as “handy” but said that it was deteriorating due to a lack of upkeep.

“The bike scheme was such a positive part of the transport infrastructure when it first started five years ago. There really doesn’t seem to be any commitment at either national or local level to its upkeep.”

Ms O’Donovan added that the National Transport Authority had given a commitment last year that the bicycle stand at Colbert Station would be reopened.

“They also said that they would open one at LIT in Moylish and also reopen the stand at King’s Island.The infrastructure was supposed to be renewed in April but hasn’t happened”, she said.

She maintains that public transport in Limerick is unreliable and the lack of cycling infrastructure means that private cars are the only sure method of commuting.

“We really need to be designing projects around pedestrians first, cyclists second and cars third. The current projects do not encourage people to cycle and that is what we need to be doing in Limerick.”

“Limerick needs to invest in inexpensive transport to attract workers to the city. Cycling is value for money when you invest in proper infrastructure. Our car-dependent society is costing us a lot of money.”

She added that cycling also has its health benefits, but above all is a cheap method of transport that everyone can afford.

“We really need to be encouraging people to cycle. We need contraflow cycle lanes and to make cycling and walking the easy choice whereas driving is the easy choice at the moment.” 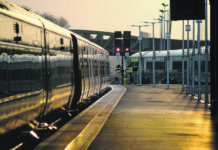 New train times for travel between Limerick and Heuston Station